Coast to Coast & Around the World-Via Corsa 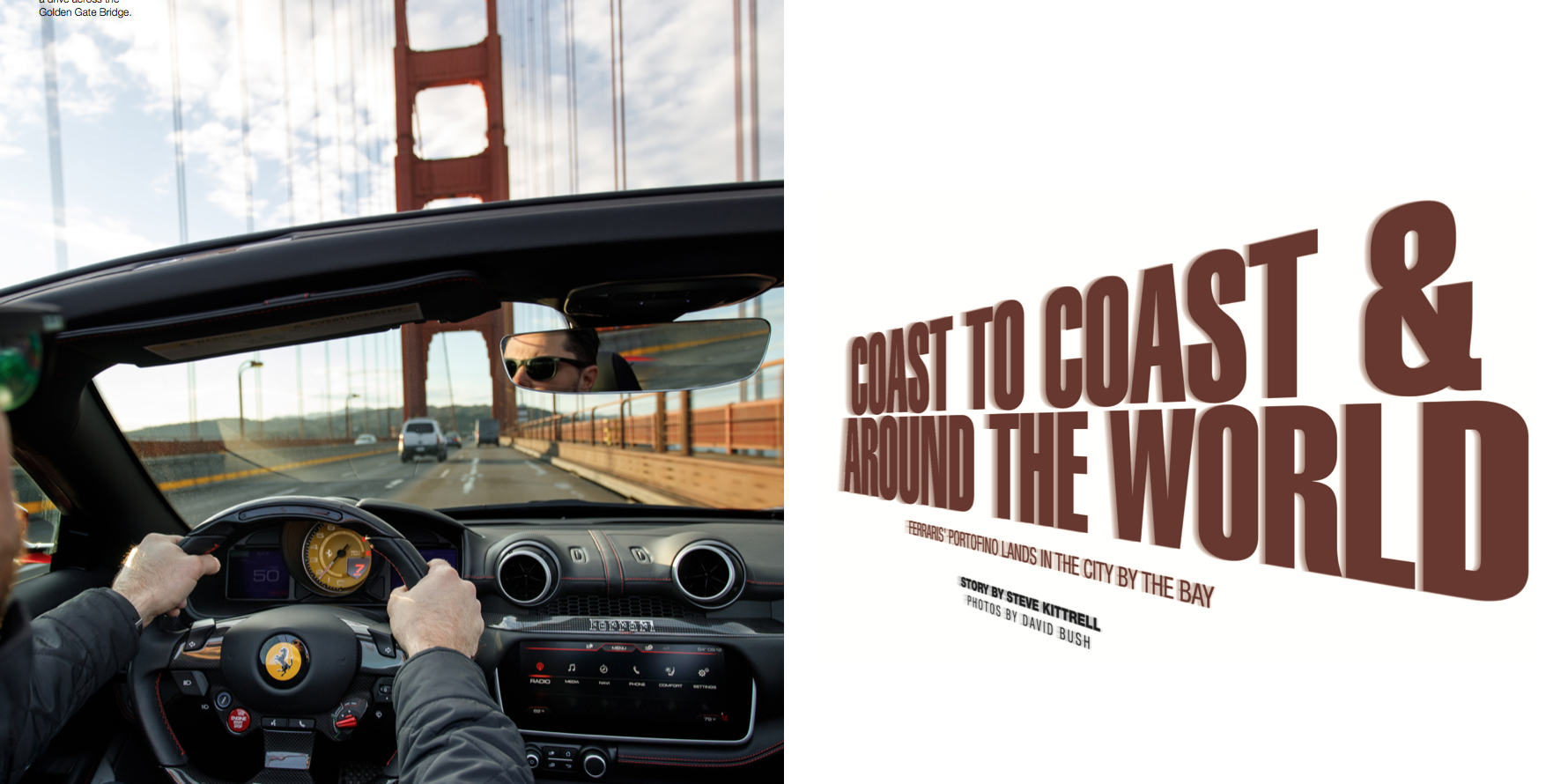 Personally, I have never been to the quaint Mediterranean Italian fishing village of Portofino, but I think it moved a little higher up on my bucket list. Ferrari paid homage to their coastal crown jewel and Metropolitan City of Genoa, Italy – the home of my Italian ancestors – with a sleek and cultured sports car. As the secession to the Ferrari California – where I live full time – the Portofino is Ferra – ri’s answer for the public demand for a V8 grand tourer, with all the raw power and comforts you would expect from the Italian automotive icon. Going Coast to Coast, I brought a Portofino with me and crew of photographers to capture the car’s grace and power around the 7×7 miles of San Francisco.

Our morning started before daybreak, with the weath – er threatening to be a challenge for a two-car-team. Most worrisome for me was not the looming clouds and fore –
cast, but the fact that we’d be driving in and around The City on a Saturday amongst all the daily tourists. After a quick test drive to the neighborhood coffee bar, we were ready to assess the city limits of the Portofino. Our goal was to hit as many San Franciscan landmarks as possible, while taxing the car in every terrain available to us.

First obligatory site had to be the Golden Gate Bridge. There aren’t many more iconic structures in all of America than this 746’ tall by 8,981’ long bridge, which
finished construction on April 19, 1937 and cost $35 million (equivalent to $496m today) to complete. Shining high in its golden orange paint, it really is an incredi
– ble thing to drive over, no matter how many times I’ve personally done it. Lanes seemed to willingly open up to us and allowed the engine to really come alive. And boy, did it ever.

With 591 horses pulling the 3.9-liter V8 at 7500 rpms, the integrated twin-scroll turbochargers really kicked into gear any time I asked it to. I could hear the free-flowing intake and single piece exhaust headers sing across the bay. When I took the car up the curvy Marin Headlands backroad to get an amazing and intimate view of the bridge and the rest of the city, it had no issues at all and sounded like it wanted me to push it more. Pointing its nose from East to West, the Portofino was geared up to conquer more of the concrete jungle ahead.

Back across the bay we went, aiming for the Embar – cadero on our way to China town. Traffic was relatively light as we passed the Marina Green but got heavy as we
reached the tourist attractions. Saturday morning farmers markets slowed us down a bit but gave me an opportuni – ty to study and appreciate the interior, dash and displays. First thing that pops out are the two 5” displays behind the steering wheel and the 10.25” multitouch infotain – ment display screen which were all very bright and easy to use. The passenger display, which was embedded in between the dash and glove box, allowed your co-pilot to watch your revs as well as where you were headed – very cool.

This model had the carbon fiber steering wheel upgrade with the LED shift lights at the top, with buttons and driving controls easily available to the driver. Ferrari
believes you should never have to remove your hands from the wheel to do anything. As a grand touring sports car, it’s technically a 2+2, but we all know that means
very little for Ferraris. With fold down leather trimmed ‘back seats’ I could comfortably fit a backpack, day bag and maybe my wallet – but no more. But who cares! I’m
not positive you could even fit a set of golf clubs in the trunk, so realize that the Portofino is for pure pleasure and little else.

With my eyes back on the road we aimed to shoot near Nob Hill off California Avenue. Part of my challenge was the slippery and uneven roads of SF, which was
nearly everywhere and unavoidable. The car seemed to understand the task at hand, sending the electronic differ – ential and the F1 traction control system into full duty un – der the throttle launches up the hills or even to just make it through a yellow traffic light. Still the perfected systems performed nearly flawless, providing a smooth ride in lower speed corners to blasting through straightaways, while keeping all four tires on the road.

On our way up Russian Hill to the legendary Lombard Street. You’ve seen it before; the famous block with eight hairpin turns, enthusiastically known as the ‘crookedest
street in the world.” It’s also a major tourist attrac – tion with a claimed 17,000 plus visitors a day on busy summer weekends. No such traffic for us as I casually
glided down the paved roadway with ease, enjoying every second and all the colorful backdrops around me. Our journey took us higher and higher as we aimed for Twin
Peaks, which is about as dead center of the city you can get. The namesake derived from the pair of 925-foot-high summits are surrounded by a very green 64-acre hilltop. Ironically, it’s also a very popular neighborhood populat – ed by mid-century modern homes which have some of the best views of the city. Triple-pronged Sutro Tower an.

The hills of San Francisco were no challenge for the Portofino’s twin-turbos. tenna soars over the neighborhood and is a fixture in the skyline. My goal was to put the Portofino in a position to be a fixture as well – and it stood out completely among the greenery of the hill’s and grey buildings of San Fran.

Time to put the top down as the sun finally decided to make an appearance – a very common characteristic of Northern California. Its bi-polar weathered nature is
perfect for the Portofino’s impressive hard-top convert – ible. We are so spoiled in the modern age of all-season folding hardtops that retract and extend at the press of a button. Long gone are the days of special tools and long procedures to get roofs to obey our commands. This Ferrari engineered accessory worked like a charm, and
impressively under 15 seconds.

Now driving on the freeway on our way to the San Francisco – Bay Bridge. I switched the steering wheel over to Sport Mode in order to weave in and out of traffic a bit. The adaptive suspension with an electronic limited-slip differential was rewarding and handled well in this element of driving. Prior to 2008, no roadgoing
Ferrari had ever featured a front fitted eight-cylinder engine, a dual-clutch automatic transaxle at the rear with direct fuel injection and a hard top. All of these marque firsts showed up at once on the sweet-driving Portofino, and with excellent styling as well.

Sundown was near, after a late seafood lunch in South Beach. I highly recommend the clam chowder bowl from Anchor & Hope, which ironically used to be a ser –
vice and smog garage now converted. GPS took us over to Treasure Island to get the best view of the Bay Bridge, and it did not disappoint. Crowds of weekend wine drink
– ers from the Sol Rouge Wine tasting room poured around the car and invited photo opportunities for many. The Portofino put on its best face and made profile pictures
for impressed patrons. We welcomed the picturesque views and captured the final images from our day. Ferrari made it possible to challenge their Italian Riviera stallion in my Golden State – and I bet my relatives would be proud to know that it performed like a dream.

Tunnel Vision: nothing else to think about when piloting the Portofino.