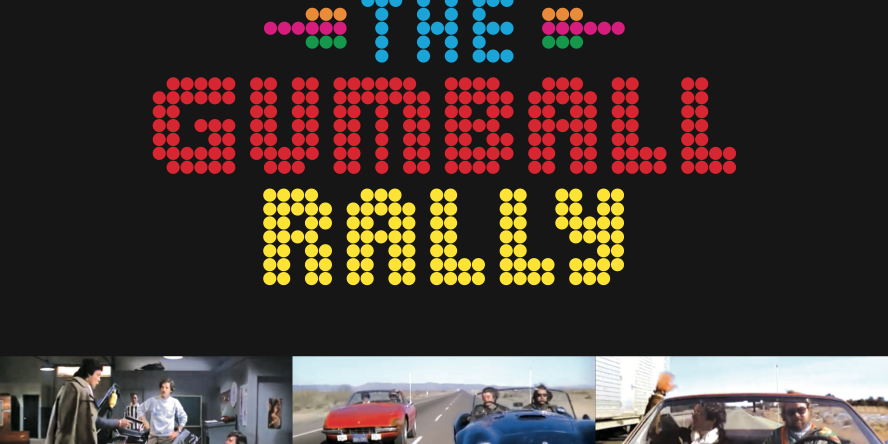 WE’VE ALL HEARD THE FAMOUS LINE BEFORE; “THE FIRST rule of Italian driving: what’s-a behind me is not important.” Of course, this was made famous by Raul Julia as Franco Bertolli in the definitive 1976 automotive driving flick, THE GUMBALL RALLY. An amusingly whimsical movie about a candy maker’s dream to have a coast-to-coast sports car race from New York to Long Beach, casted by an abundance of characters in just as many cars. Ferrari pinned against Cobra and 911, Silver Shadow
driving next to a Chevy van – complete madness on the open roads with only one rule: there are no rules. Well, it got me thinking a little more about what the words of Franco meant to me, and when the opportunity came to play like the stars did, I absolutely took it.

No, my experience with the car didn’t quite live up to the hype of chasing after a 427 Cobra in and out of the Los Angeles River, but my intent was to the be the same as Franco’s. It was an early morning when I got the call from local collection manager, Gooding & Company auction conductor and overall humble aficionado, Ricky Reed. He and I had been friends and cohorts for over a decade, trading Ferrari parts and opinions on where the market was from time to time. Occasionally I’d get the call
from Ricky to exercise a car headed to a forthcoming concours to work out all the kinks and discuss how it might be judged. This day was a little different. This day we were putting the unimportant behind us.

Of course, I cannot disclose the location of the car, the collection, or its roommates, but the general whereabouts is in the Monterey area, where both Ricky and I are from. Everyone always associates Monterey with Pebble Beach car week – and for good reason – but we know our town a little more intimately. More specifically, we know where to drive and when to get the best open roads; the ones that are coveted by so many around the world.

“Steve, it’s time to take out a car. Let’s go on a little rally. Its time to get out of town,” Ricky spoke softly on the phone. Without skipping a beat, I hustled down to his location not really knowing what the weapon of choice was going to be. Already being wiped down and warmed up in preparation for the drive was chassis 14829 – a 1971 Ferrari 365 GTB/4 Daytona spider. A purely recognizable Scaglietti-bodied masterpiece was striking in its rosso corsa paint, but would stand out in any color.

This car in itself is a rarity, and being one of the few to own a Daytona spider said something about your eye for style, taste and the gentleman driver. During its production run of 1968 to 1973, only 1406 were built and, out of that group, there were a mere 121 factory-produced spiders. This of course does not include any of the non-sanctioned cut-and-converted spiders made popular in the 1980s and 1990s.

Approaching the car with all due respect and reverence, I investigated the room where the car was stored. The walls are lined with vintage posters, all similar but with different text and script from diverse languages. I settled on a Latin version of THE GUMBALL RALLY which read, “Loca! Loca… Y Despopilante Carerra a
300 km. Por Hora de Carajadas!” Which roughly translates to, these people are crazy and driving 185 mph, you must see this movie. It then dawned on me that my ride for the day was in fact the hero car from 1976.

While the car in the movie appeared to be a top-notch running piece of Italian machinery, the truth is, the real thing was no slouch either. It’s armed with a 352hp,
4390cc DOHC V12 engine with six finely turned Weber 40DCN17 carburetors, a five-speed manual transmission with independent front and rear suspension and standard four-wheel hydraulic disc brakes. In any generation, this is a wellconstructed and balanced automobile, and just happens to be a Ferrari as well.

This wasn’t nearly my first time being behind the wheel of a Daytona, or a Daytona spider. Routinely I test drove and exercised clients cars while with GTO Engineering
in Los Angeles – so my expectations were just as high as the oil pressure reading on the instrument cluster. The plan was simple enough, which was to put what wasn’t
important behind us. Easier said than done, no matter what you do for a living or what you’ve got going on at home. As a working automotive professional, the last
thing you want to do is to be around cars or it’s the only thing you want to do. This day, we chose the latter as our method of release.

This North American spec car was factory-equipped with air conditioning, those iconic black and red Daytona seat inserts and, naturally, instruments reading in miles. Going back a bit into its history, we know that it was originally delivered through Bill Harrah’s Modern Classic Motors to its original owner, a Mr. Nicholson, who had the nose band repainted silver metallic gray, which it retains to this day.

Shortly afterward, chassis 14829 was sold to a Ferrari mechanic and race car driver Joseph Crevier of Mission Viejo, California, who then offered it for sale through classifieds in the LOS ANGELES TIMES in the late 1970s. Crevier also knew people in the movie industry and made the car available for THE GUMBALL RALLY. Oddly, the nose was repainted red for the movie but was returned to its original gray afterwards. But this is where the story gets interesting…

In 1982, Crevier filed for bankruptcy and spent twenty days in jail for refusing to tell the court the whereabouts of this car and other assets. Despite its owner’s best efforts, the spider was eventually sold by Crevier’s court-appointed trustee in 1983 to Walt McCune, who rapidly traded it to Noel Blanc, son of Mel Blanc, known as The Man of a Thousand Voices.

You know Mel Blanc, or at very least you’ve heard him as Warner Brothers’ golden voice who gave life to characters such as Bugs Bunny, Daffy Duck, Porky Pig, and Yosemite Sam for over sixty years. Blanc was an active motorhead in the Los Angeles car culture and owned some of Hollywood’s most iconic movie cars over the years. The collection was a joint passion with his son, who continued to maintain and enjoy the cars long after his father’s passing in 1989.

While in the Blancs’ collection, the Daytona spider reportedly was only driven three times a year, spending the rest of its time properly serviced and maintained in
their private garage. What a pampered life, being serviced by famed Modena Imports on LaBrea Avenue, repainted by the renowned Junior’s House of Color and
reupholstered by hot rodding legend Tony Nancy. It also appeared in a 1983 issue of ROAD & TRACK and displayed at the 1995 Rodeo Drive Concours in Beverly Hills.

Fast forward to 1997 where the car now belonged to a private collection in Southern California. During that time, it was regularly displayed at shows such as the Ferrari Club of America’s Annual Meet at Century Plaza in Los Angeles in 2002 and also at the Blackhawk Museum in 2005. It was also reunited with the Shelby 427 Cobra that was its co-star in THE GUMBALL RALLY, thirty years later for a feature article in the summer 2006 issue of MOTOR TREND CLASSIC.

From what I could tell, the Daytona remains very much as it appeared on screen and is in what I consider preservation condition, showing just under 15,000 actual miles. Aside from an unassuming yellow pin striping down the body, rectangular reflectors below the taillights and a white reverse light below the license
plate frame, this car is wonderfully honest and a solid piece of Southern California car culture.

It’s an overall aggressive looking car as well; strong from every angle with its stretched-out hood and wide hips. It sure pulls like a locomotive but, inside tight
curves, it’s fairly tame as you must us e heavy breaking to slow down this train. It’s loud in the cockpit from a combination of wind and air pushing down on the flanks. And then there’s the insanely beautiful roar of the engine as it starts to climb from ALL PHOTOGRAPHY OF 14829 BY PAWEL LITWINSKI PHOTOGRAPHY third gear on up.

The spirit of the drive had similar movie star undertones, minus snapping off the car’s rear view mirror and casually tossing it over our shoulders like Franco
had. However, the lighthearted vision and drive down the Pacific Coast Highway 1 was very much in line with core of the movie. Toss caution to the air, turn off
the white noise surrounding your daily grind and redirect your troubles into the machine beneath you. Down the coast we went, pushing it harder at each straighta-way. Smiles stretched wider than the seascapes below us, tensions released after each bridge we crossed. Racing no one but ourselves and not caring who the winner was. Further details of our rally are rather insignificant, but the fact we crossed the finish line is not. It’s a comfort to know the keys to the big-screen mentality are there awaiting the driver who dares. It’s not a risk… it’s a challenge.