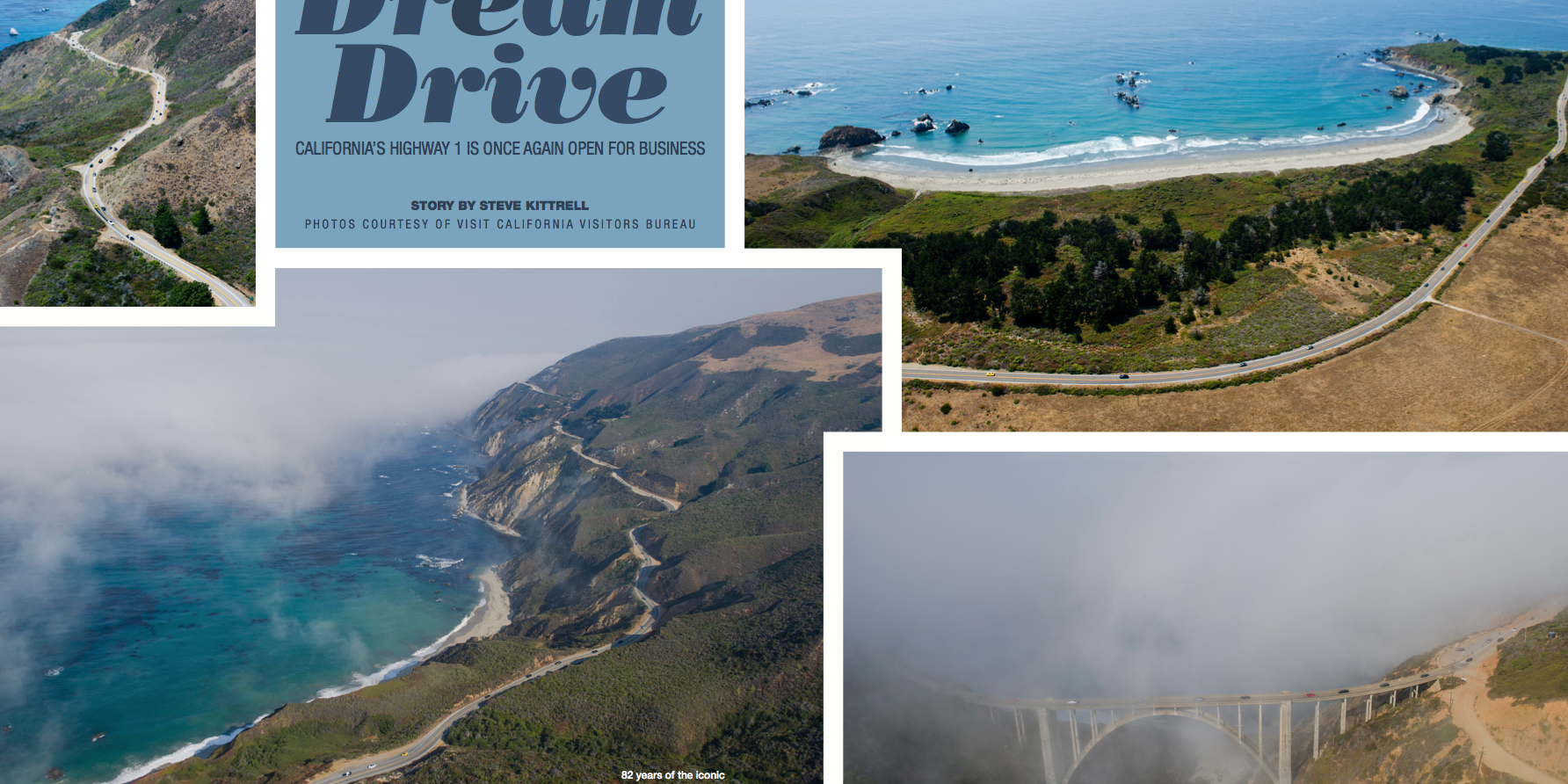 I’ve heard Big Sur, California described many times as ‘the greatest meeting of land and sea in the world.’ Obviously, that’s a very bold statement, but if you’ve ever taken that majestic drive along the coastline, stopped and stared out into the Pacific Ocean – you would be hard-put to argue. Sadly, this land and the sea came crashing into each other, and not in the Jack Kerouac poetic sense either.

On May 20th, 2017 a substantial rain-induced mudslide forever changed the landscape of one of California’s most iconic vistas. California Highway 1 at the Mud Creek
site in Big Sur suffered tremendous damage, resulting in nearly 50 acres of land displaced. The Mud Creek slide site was daunting in size and was an emergency response
with all-hands-on-deck to prop up a corner of the North American continent. For 18 months, Northern and Sothern California had a definitive separation – one that would pin mother nature and manpower against one another. 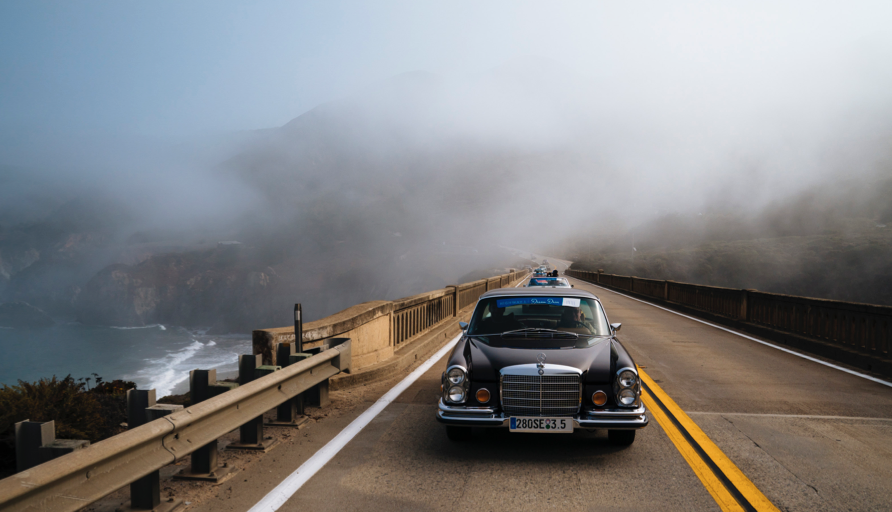 The goal? To realign the highway atop of the landslide using new reinforced embankments, netting and retaining walls along with other techniques and materials to
stabilize the site. State planners, geologists, engineers and countless others working tirelessly to reconnect the communities affected by the slide. But we’ll get back to that.

Let’s fast forward to this past August, where a celebration of the accomplished work was about to take place. A gathering of global interest for the road and these cars was brewing, right in my personal backyard, with a drive to honor the road and the men and women who built it many times over.

We begin the morning above the Monterey county cloud coverage at Weathertech Raceway Laguna Seca. Lined up in rows together, 84 cars representing 84 years of Highway 1 were ready to head South, destined for Morro Bay. After a quick lap around the racetrack, we cut through Carmel Valley on our way to cross the iconic Bixby Bridge. Brunch was held at The Ventana Big Sur Luxury Resort, and so far, every car had made it without
any issues.

My instrument of travel was a stunning 1965 Alfa Romeo Giulia Spider 1600 Veloce, dressed in slate grey over red interior. Owner and co-driver on this adventure was
Pebble Beach resident, Steve Yu. He and I have been familiar for several years, as members of the Pebble Beach Sports Car Club, so we were excited to represent the Peninsula together among drivers from all over the state.

Alfa Romeo Veloce spec’d cars are a brilliantly balanced combination of a twin-weber carburetor engine, high compression European cams, Girling front disc brakes, a 5-speed manual gearbox with a recorded top speed of around 112 mph. In all fairness, by today’s standards this two-door RWD sports car isn’t the quickest car on the road – but in no way must be. Perfectly paced and tuned for the windy roads of California Hwy 1, this elegant and spirited little Alfa reacted perfectly.

“With a classic car, any road trip is an adventure. The car performed flawlessly. It’s amazing to think that the treasures of Highway 1 are part of my neighborhood, and that people from all over the world make special trips to experience it,” Yu said after the drive. “I think it was a perfect car for the drive because it’s a great handling convertible with beauty that complements the California coastline.The car is easy to drive and quiet enough that we could have pleasant conversation while admiring the scenery.”

As I mentioned, Steve and I are members of the Pebble Beach Sports Car Club which is a gathering of local car enthusiasts from around the Monterey County area.The club was started in 1952 after a group of guys sitting around a bar decided that there should be a formal collective to promote sports cars. Around 20 founding members
threw .50 cents in a jar to start the official treasury, but now holds 200 strong members who actively endorse and organize many events during the Pebble Beach Concours and races at WeatherTech Raceway Laguna Seca. Members are not only local, but spread across the UnitedStates, I’m told by club chairman, Warren Pierce. On this day, there were half a dozen members of the club on this drive, which reminded me a bit of what some of the drives might have been like during the early stages of the club in the 1950s.

Down the path we went, cutting in and out of misty fog and patches of sunshine, passing by landmarks such as Rocky Point, the Julia Pfeiffer State Park waterfall,
the Henry Miller Library and countless scenic overlooks. Around 40 miles north of our next stop, all the hard work was revealed. The site of the Mud Creek Slide was
a visual change for all of us. Freshly paved roads with a brand-new hillside and built to sustain future disasters. 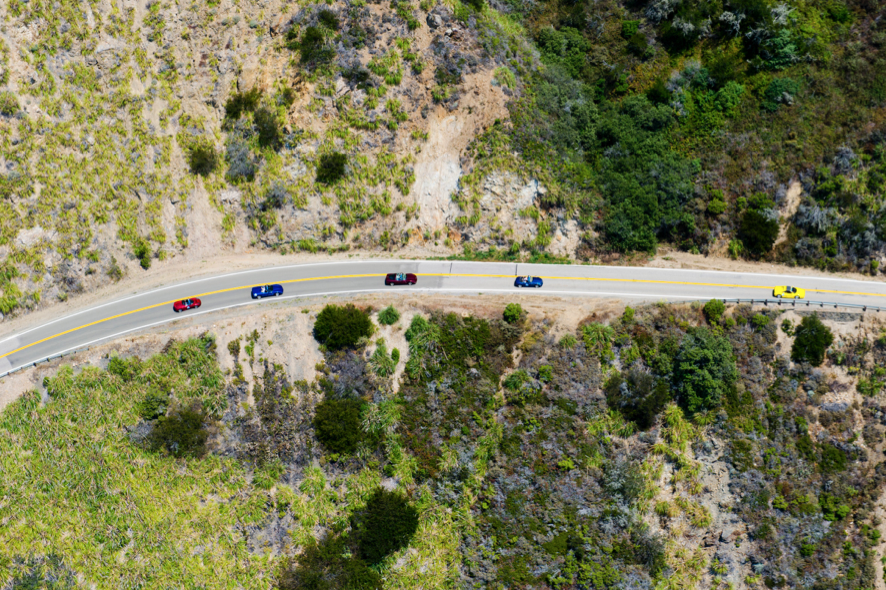 It’s designed to work with nature and midway up the slide site are two massive retaining walls. Positioned much like pinball machine arms, the walls will both catch
future debris and funnel it down the hillside where there is more space. This is where the roadway curves out toward the ocean. Highlights of the CalTrans rebuilding
included adding a new curve to the highway, providing space for a catch zone for any lasting material that might break free from the hillside above the roadway. Now a
fantastic work of art which is attracting motorists, north and southbound. Caroline Beteta, President and CEO of Visit California had this to say about why it was important for this patch of road to be repaired. “Because Highway 1 is such an iconic California experience, losing that connectivity and access to destinations
along the coast was crippling – communities surrounding the closures saw a sustained loss of $500 million just in the first few months. As travelers put off their vacations or were rerouted, businesses that rely on visitors had to work hard to keep their doors open – so getting traffic back on the Pacific Coast Highway is of huge importance to both our local and state tourism economies.”

Another stop at the Hearts Ranch Winery in San Simeon, California for stunning coastal views, charcuterie and refreshments. This spot is rarely open to the public –
a barn really – that serves as the warehouse for the main winery and tasting room. Cars parked completely around the property, which gave everyone a chance to stretch
their legs and cool down the cars. I’m constantly amazed at what is yet to be discovered in and around the Central Coast of California.

The final leg of our journey was at the base of the Morro Bay Rock for a revelry in our accomplishment. Before reaching our destination, we toured the small fishing
community, which it seemed the entire town had come out for. Passing through the finish line was rewarding for both Steve and myself.

We were warmly greeted with live music, fresh bites and favorable weather. Cars were parked in a large circle on Morro Bay Rock, which is about 575 feet tall and had
been a naval landmark for hundreds of years. Can you believe the rock itself is over 23 million years old? We toasted and reminisced with fellow drivers and media
members from around the globe. The road is open, and so are the possibilities.

Overall, Caroline Beteta was pleased with the trip and felt it would put a global focus back on our California Coastline.

“Driving Highway 1 is a bucket-list experience for travelers from around the world. And in California, we like to Dream Big. So, to celebrate the scenic highway that’s been part of our state’s history for more than eight decades, we were proud to highlight the highway’s past and future with the Dream Drive, shining a global spotlight on the fact that California’s Central Coast is open for business, and there’s never been a better time to visit.” 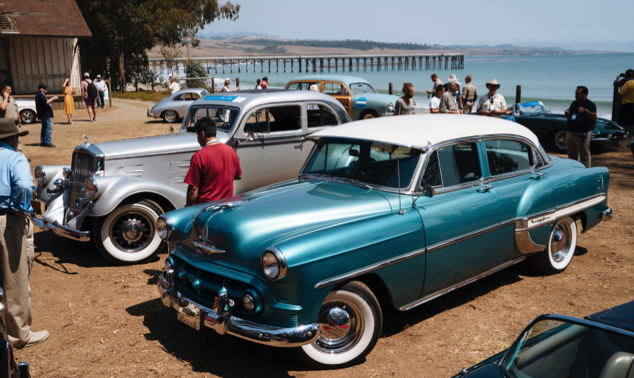 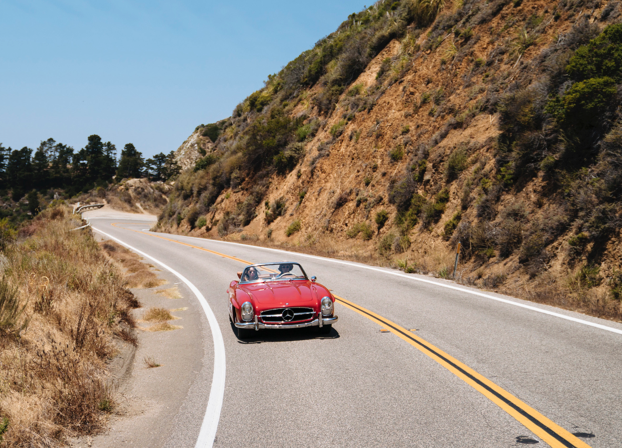