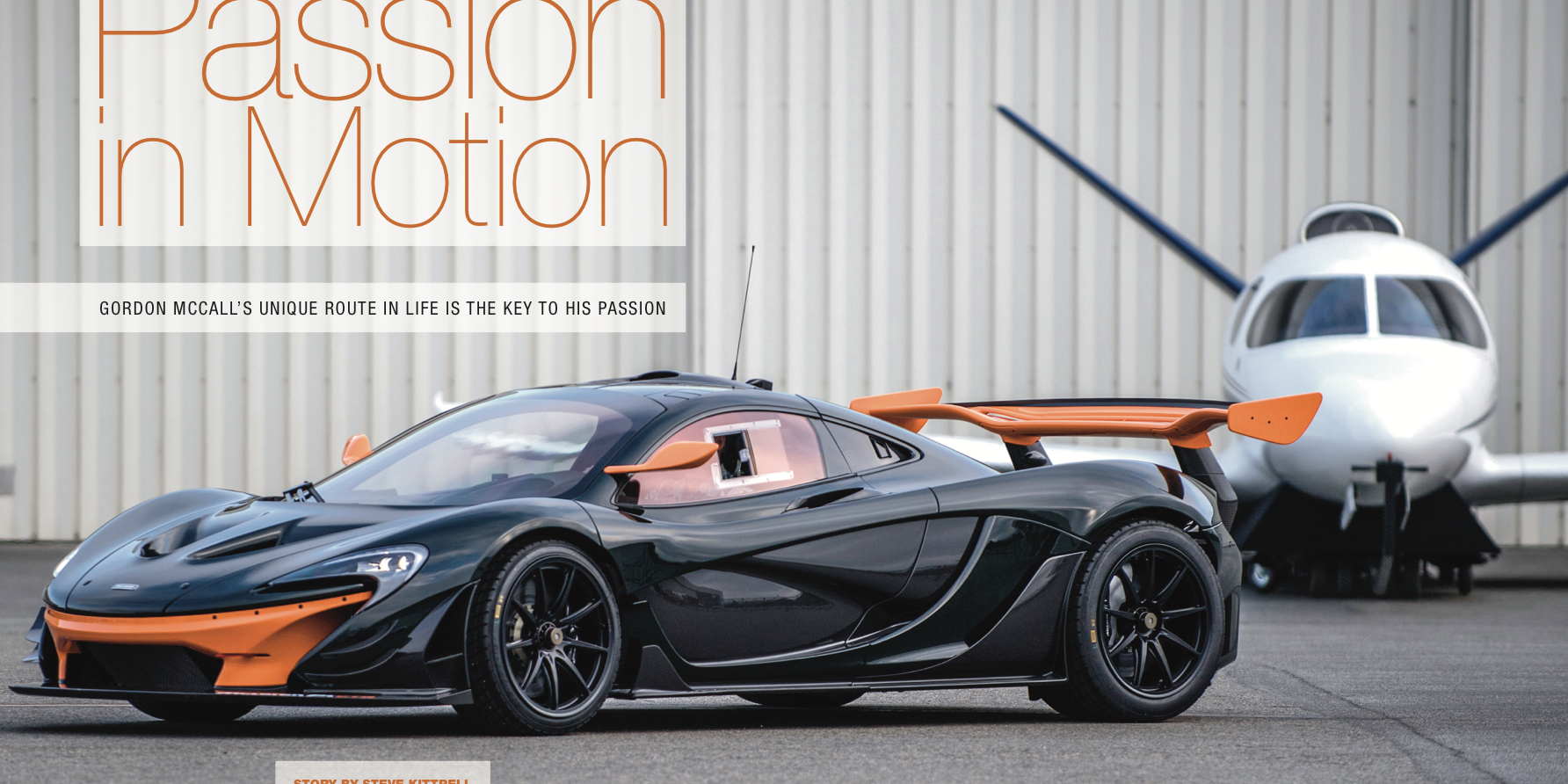 Motion is a very common action in all of our lives, and we all tend to move in different ways throughout the years. A proposition of change usually leads to that action. Gordon McCall, Monterey’s hometown car hero, has made a life of staying in motion, while signaling his own path for all of us in the automotive world to see.

Born in Princeton, N.Y., Gordon moved to the Monterey Bay area when he was three with his mother, whose father lived in Carmel. It was treasured beginnings, growing up on the Central Coast. Summers out at Laguna Seca, influenced by the long California days and an endless amount of road to move on. Cars instantly got into his blood.

Gordon lost his dad when he was only 8 years old, and while most auto enthusiasts share the common thread of learning from their dad or grandfather, this wasn’t the case for Gordon.

“I have a hard time putting a finger on where I got it because I’ve had it my whole life. Obviously being around Laguna played a significant role in my life, with my mom dropping me off there as a kid,” Gordon reflected. “Bottom entrance on HWY 68 walking up to the track, and I had to be back on the road before 6 o’clock to be picked up. She was always very supportive, and always knew I had an interest there. She was good about turning me loose, but most of it was self•taught. Sports, cars and bikes – that’s my life.” 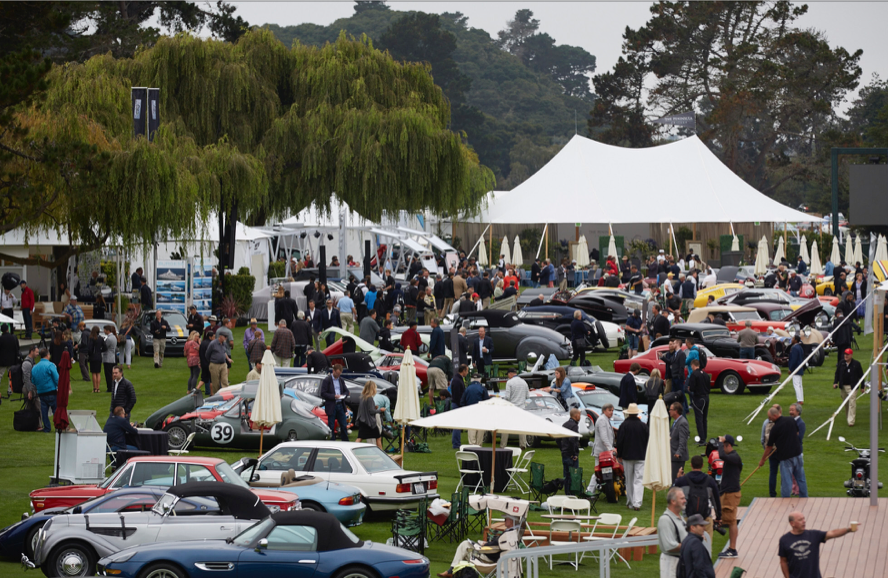 By his teenage years, every local automotive organization was hard pressed to get rid of Gordon and his tenacity. Volunteering wherever he could and poking his head into any garage that would allow him in.

“Well the Ferrari dealership couldn’t get rid of me to start! I was down there every day with a broom trying to clean up the place in the evenings. Just fascinated to
be around the guys working on the cars, let alone the cars themselves. Even then, I knew how special it was,” Gordon recalled.

Interest leads to passion, passion leads to desires and desires tend to guide you to work in order to feed all of the above. After much persistence, Gordon was offered
a job at Ferrari of Monterey and officially started his career with cars. That drive and influence always directed Gordon back to the road, and the best road in the country was in his backyard.

“I’d go out to Laguna with my friends, and this was back when they had a sesame lock with a chain on the Highway 68 gate. That was the extent of our obstacles
growing up, even while being occupied heavily by the military at that time. “Gordon would take measures into his own hands. Further developing and honing his skills and affinity for his own budding automotive passion.

“So, my first car was a Datsun 510. I’m telling you, I had it lowered in the first 24 hours that I owned it. There was a junkyard in Salinas, and I learned that the Corvair 6 ½ inch 5•bolt pattern rims would fit my 510. We’d open up the gate, drive to the top of the hill, jerry cans of gas, and if there were no MP’s (Military Police) – you were good! It was our track. It got to the point that we had run the track so many times, we started running it backwards. At 16 years old, literally running the track backwards. Can’t do that anymore.”

Fast•forward to the beginning of what has become not only the biggest party during car week, but also for the Monterey County locals: The “Jet Center Party” as it has been casually called. Now, in its 26th year, the “McCall Motorworks Revival” (as its officially named) started with humble beginnings to grow into the meeting grounds
for major commercial conversations and sponsorships of major modern manufacturers, such as Toyota and Alfa Romeo to modern marques like Pagani and Koenigsegg. An idea that was innocently conceived turned into the first meeting of cars and planes, as we know it.

“It’s special to have pioneered the idea that we see materialized before us today. Prior to the Revival, it hadn’t been done before,” Gordon said. “The social event
went from 100 people growing into the hangar next door, to the most cleverly disguised round of golf you could imagine. Captains of industry flock here and business
is being done while having a total blast. Gulfstream has been our longest partnership because they sell planes here. In the year 2000, we hit our capacity of 3,000 people, and its stayed there ever since.”

Each year seems to be bigger and better – but I asked Gordon if those were realistic expectations.

“Keeping it alive and fresh and relevant is not an easy task. It started with a client list I had built from my restoration shop adjacent to an airport hangar. We were
working on a lot of cars that were headed to the races or Concours, and it was a great time to get together with people. I credit my mother and her East Coast social
roots. I was always the kid emptying the ashtrays and topping off champagne at parties as a young boy. We had many wonderful people in town, and we decided to bring
them all together and it just worked.” 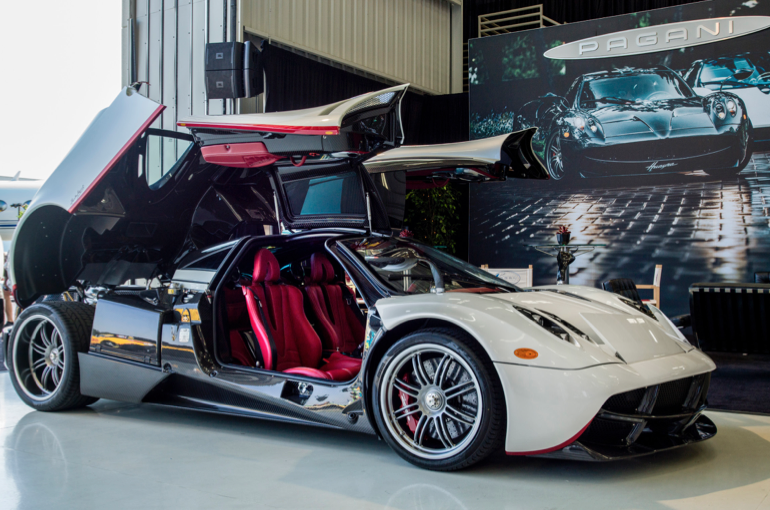 Trying to quantify Monterey Car Week is nearly impossible, but we both agreed that it’s easily a billion-dollar week, with the pre-historics through post•car week
ripples and connections being made. One of the pinnacle events, without question is “The Quail, A Motorsports Gathering,” which hinges the event together from end to
end. Fifteen years ago, “The Quail” was created, which was really a paring off of energy from Pebble Beach, which Gordon had been involved with for 28 years, starting as a volunteer parking cars, and working his way all the way up into a judge’s position. Bruce Meyers introduced Gordon to Michael Kadoorie, who had just purchased the Quail Golf Course and was interested in a new event. Gordon reminded Mr. Kadoorie that cars need to be fun and none of us had to do any of this. Why not come up with a show that’s different than what everyoneelse is doing – The Quail was born.

“I have total respect for the Pebble Beach Concours d’Elegance, but I started to see a change there. It was turning into a major spectacle and thriving in its own way. I had seen and lived through its rough years in the 1970s as well. The show turned itself around, but I was seeking to host an event for the enthusiasts. Something
that reminded me of Trader Vic racing through the Pebble Beach forest.”

Gordon figured that removing the hierarchy and the sense of exclusivity could be liberating, people could have the freedom to be sociable and just have fun. “What if everyone was a VIP? Everyone is a welcomed guest and treated the same. No hierarchy. Eat and drink your way through the day – and I have to tell you that’s an incredible component, so much so that still no one else is doing the same thing. All•inclusive at this level is part of the fun.”

Gordon admittingly, and surprisingly, is a very cautious man who likes to grow things slowly and organically, which very much mirrors life on the Peninsula. Local
help and local food is the mentality – and one that lets things age naturally, like a fine wine grown in the valleys of Carmel. The Peninsula Signature Events is the Oz behind the curtain, organizing nuts and bolts year•round so Gordon can foster and feed the ideas we see on the show field. From “The Quail Motorcycle Gathering,” which is the only event of his kind, to “The Quail Rally,” Signature Events gets a huge round of applause for bringing Gordon’s dreams to a reality.

For most of us, cars and travel, shows and tracks all bleed into each other year after year. Eventually, we go home and have some free time to put a stop to the
motion. I asked Gordon what does his personal time look like and what the future holds for him and his passions.

I’m off the track. Some of my best friends are my biggest rivals. I was after the land speed record for a bicycle, and I’m not completely over it yet. I’d like to bring the record (currently 166mph) back to the U.S.”

“In terms of my future, I have the same enthusiasm for it all as I did from the beginning. It’s really key for me. I love seeing people get a kick out of the events and having a good time. We always have something that you’re not going to see anywhere else. As a car enthusiast, we have the obligation to develop the next generation. I understand the value of it, and it’s not always going to be plug and play forever. Bucket list? I’m always thinking about the future at the same time that I’m really enjoying the moment, having so much fun with old bikes and using them. There is no end to it! Happy to say that I got what I love, and love what I got.”

Just like most of us, Gordon is a product of his environment. The tie that binds Gordon with Monterey speaks volumes to the work he has built in the area.

“For me, I can take a step back and say, honestly, that I am proud to be a local. Many of the events are owned by corporations, auction houses based somewhere else,
but I’ve spent my life dedicated to this area. My wife is born here – so we are about as local as you get. It’s been an honor.” 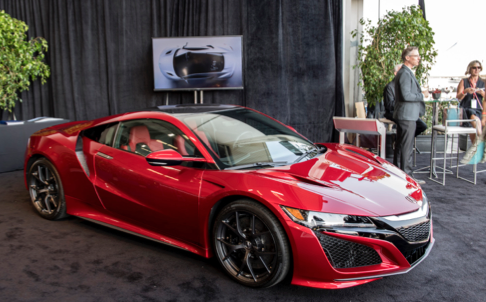