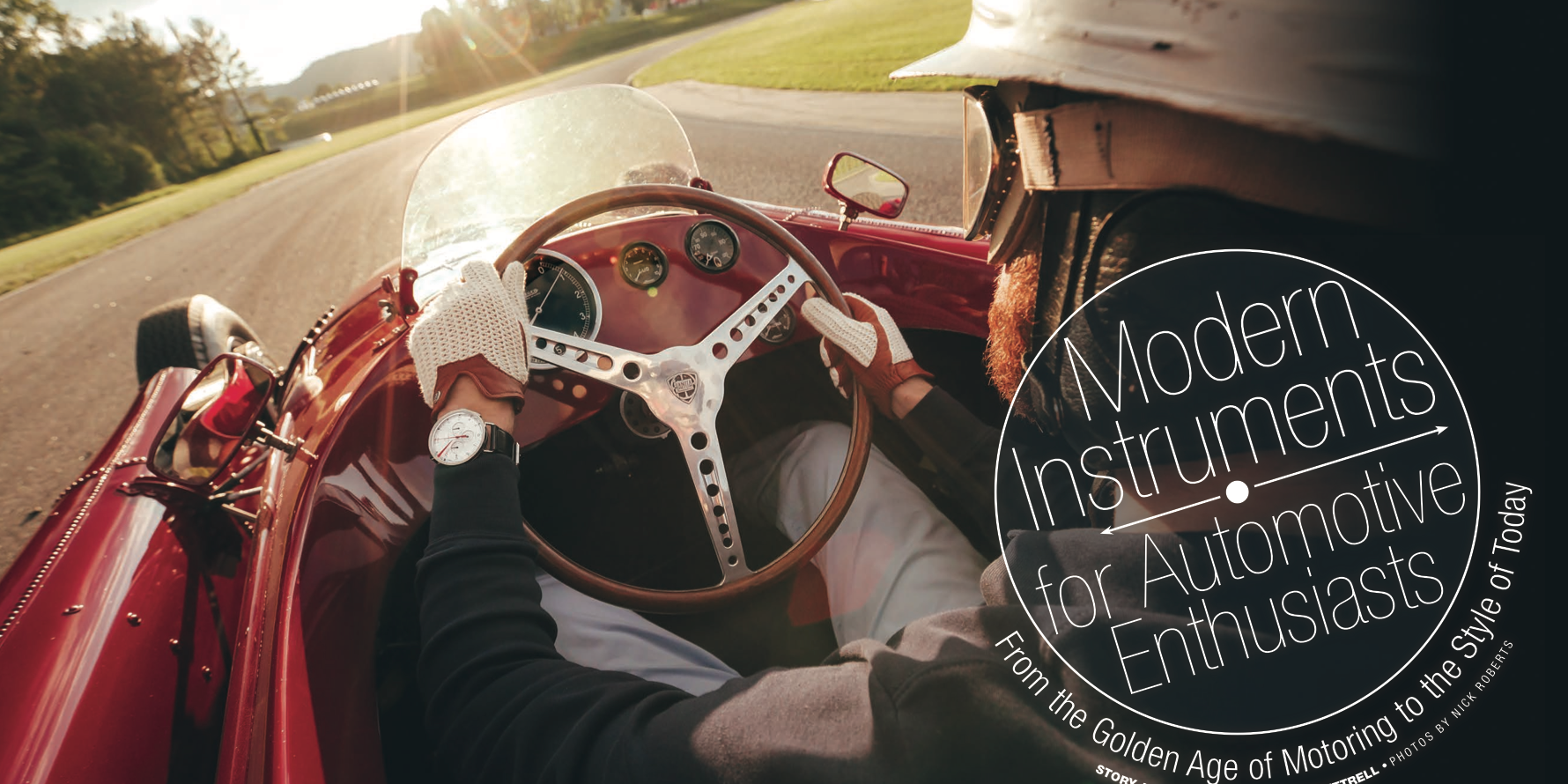 It’s easy to see why heroes are never forgotten, and how legends never die when it comes to the motorsports passion. Stories of grandiose cities, perilous roads and complex machinery are reasons why we hold onto the past with such reverent fierceness. With names like Fangio and Farina, Moss and Rodriguez, Ascari and Andretti, Surtees and Lauda — these are the table setters for the present — when racing was dangerous and the only phones were landlines.

Fast forward to today, when holding onto a piece of your passions’ past has become more important than the spoken word. Stories from your grandfather attending
Monza just north of Milan, sunsets at Silverstone, Lime Rock in its limelight or witnessing the final laps at the Pebble Beach road races are fleeting thoughts as we reach an era of instant satisfaction and gratification found at your fingertips. 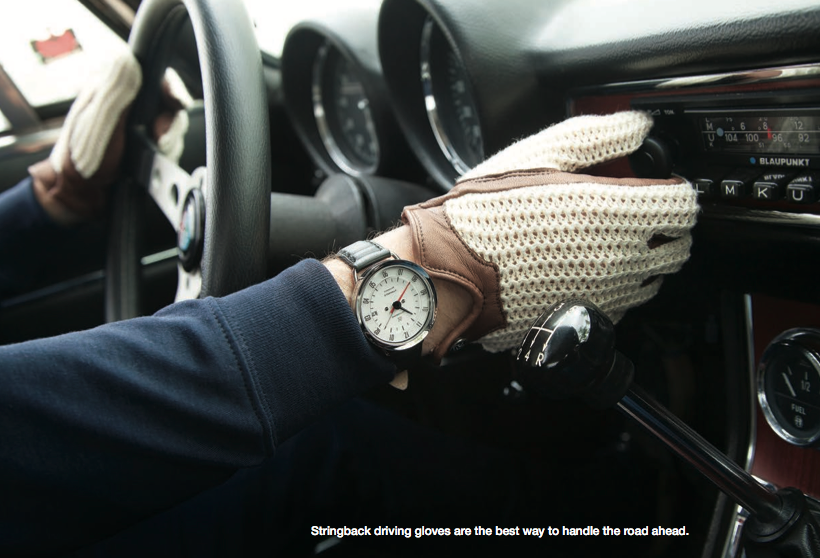 This isn’t how it once was. How do we turn back the clock, when timepieces were treasures and time was much more precious? There’s something to be said about taking that trip down memory lane with the idea of holding onto it for your own lifetime. Capturing the spirit of motoring is the challenge; one that founder of Autodromo Watches, Bradley Price, has dedicated all his energy toward. Via Corsa sat down with Bradley to discuss his products, inspiration and minimalist styling that amplifies
the golden age of racing and automotive design.

Steven Kittrell: Bradley, normally I like to start from the beginning, but as creative founder of Autodromo, tell me what’s going on today with your budding timepiece and automotive-inspired accessory company?

Bradley Price: It’s been five years since we launched Autodromo. The goal was to start something, which would allow me to do something vintage car-related every day, while also in a way, using my background in design. Once we got it off the ground, the goal became establishing a reputation as a brand for people who love cars and appreciate design. Building a status in that territory is not an easy feat. People know our brand becauseof the passion that comes through when we share the excitement of vintage cars and design.

The exciting challenge is to try and add new dimensions to it each year. This year, 2017, has been particularly exciting, as we have been recognized by some major
automotive manufacturers and not just by hobbyists, who have known us for years. We’re looking forward to sharing that info soon to the world. 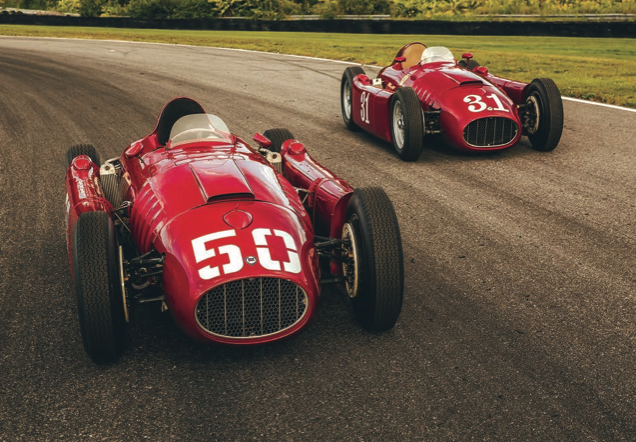 SK: There are strong minimalist traits in everything that you do. Where does this encouragement come from, and how has that theme changed over the years?
BP: Minimalism is fundamental to my design philosophy. I’ve always liked very spare, simple and clean design in general — going back to when I was developing furniture. I like the vintage qualities as well. What I enjoy doing, is taking inspiration and subtracting some of thedetails. I pare down something that is complex into a more simplified and iconic space. With a lot of the watches being gauge-inspired, what I believe separates us from other companies is that we don’t just take a gauge and shrink it down. We like to ask what is cool about this? What makes it beautiful and what details make it sing? We emphasize that, while taking away all of the other stuff that doesn’t need to be there. It’s not a gauge; it’s a watch. My goal is always about compressing something down to its essence.

SK: But a watch is a complicated item, do you ever see something terribly overdone?
BP: You can go too far sometimes, and then it becomes boring. One of my favorite quotes comes from Miles van de Rohe, who said, “An interesting plainness is the most difficult and precious thing to achieve.” This just sums up my thought process perfectly. Minimalism is uninteresting if it’s just blank. It’s about bringing it to life with just the right amount of proportion and detail. That’s the daily challenge with what I’m ultimately trying to accomplish.

SK: Okay, let’s track back to the start — first car you ever remember. There had to be one that stoodout more than others?
BP: Austin Healey 100-6. That was the car that mydad had when I was a toddler, so I remember it very well. As a matter of fact, I recently saw one and caught myself
running my hands over the tail lamps and badges of the rear. I think as a kid, you experience cars at eye level in a way that you don’t as an adult. You know, you don’t just look down on a car; you look into it. As a child, it’s much more at an architectural scale. If you’re next to the car, you don’t know what’s inside until the door opens, and it’s revealed to you in a way that I feel is with a lot of mystery. There are many vivid memories of just watching.

SK: But a watch is a complicated item, do you ever see something terribly overdone?
BP: You can go too far sometimes, and then it becomes boring. One of my favorite quotes comes from Miles van de Rohe, who said, “An interesting plainness is the most difficult and precious thing to achieve.” This just sums up my thought process perfectly. Minimalism is uninteresting if it’s just blank. It’s about bringing it to life with just the right amount of proportion and detail. That’s the daily challenge with what I’m ultimately trying to accomplish.my dad wash the car; looking at the chrome and the tail lamps in the sun — those thoughts have stayed strong for me. The texture, sound and smell of the car, of course, are really ingrained recollections. All of that surely left a lasting impression on me.

SK: Tell me about the first car you bought. Was there more of a sense of freedom or responsibility when you first got behind the wheel?
BP: My first car was a BMW 2002, back when those cars were cheap. This was a nice example, I would have to say — round-tail, dark blue, totally stock — and it was
the most exciting thing for me because I finally had a car of my own. Responsibility, yes, but more so was the pride I had. My aunt and uncle had promised me this Alfa
Spider lurking around in their garage, but by the time I was 15, it was toast. (Laughs) The 2002 was a consolation prize in mourning for the Alfa, but the 2002 was
the nicest present I had ever received, even to this day. I drove that car to college, throughout four seasons, and it was like nothing that the kids at school drove. I had this very unique car that nobody had. No doubt, that was my introduction into what it was like owning a classic car. My car cost a fraction of the new cars other kids were given, but people thought mine was worth a fortune. It made me start to understand things that were truly unique and special, and how I can express my personality on my own terms.

SK: What is your current grand touring or GT obsession? There should be something in the garage that helps fuel inspiration – that’s why we are all here, right?
BP: I used to daily drive an Alfa GTV6, but my Ferrari 308 GT4 is the first special collector car to me. It’s one of those things where I said, “Am I really crazy enough to do this?” I remember seeing this car on Craigslist, and the price was right. I told myself that I’d be stupid not to buy it, and that I could figure out the rest later. And there hasn’t been a single minute of regret. You feel special every time you drive it, and it’s truly a rewarding

vehicle: the sounds and smells – the quintessential Italian automotive experience. It has the sense of occasion, and forme that is one of the things that my brand leans toward.Wearing my watch should give you a sense of occasion.That’s what separates us from other companies, and I draw from that relished spiritual joy in my daily life.

SK: You take this passion and love and in which you drive it into something mechanical and tangible. Something you can give back to enthusiasts. And just like that, Autodromo was created?

BP: The idea really came to me in a flash. I had been a little unhappy in my daily job and started thinking outside of the box. One day, I was driving my Alfa and was looking at the gauges and the typeface, and I thought that it would make such a great watch. Why is no one doing this? I should make this product. Now, this was the age before Kickstarter, so I really had to go through a lot more steps. I had to ask for advice and contacts on a very basiclevel. It took two years from when I started, to when I sold my first watch. But the journey was something I would never change.

SK: When I look at your pieces, I feel the automotive string you are trying to pull from would be the past to the present. What is your process when looking for milestones in our motoring lineage?
BP: It’s been very personal, and what I’m most excited about in this moment, which has all been kindling for the process. My visual memory has helped navigate the
sources of inspiration. This will expose new things and new territory. In the case of the Stradale, it was all about the ‘60s in Italy. Driving across a country in a day to get to a race weekend, racing it and then driving back in the same car. This watch tries to encapsulate that spirit. I aim to do this with every product. I want everyone to get this feeling on a deeper level. People start to recognize typeface and lettering, which are specific references to that car, time and period. Multi-layering is very important to what I do. Automotive Easter Eggs if you will.

SK: You’ve done collaborations for your “Look Books” with some serious cars. Anything stand out as a pinnacle moment so far?
BP: This year we shot with the Lancia D50, which is owned by the Revs Institute. We shot that on location at Lime Rock Park, which was a most gratifying professional moment for me. To have that time and access, was so rewarding. Just to get the right car at the right place with the right photographer was such a coup, in order for it to all come together. The “Monoposto Look Book” was some of the best images we’ve ever had, and we really captured the in-period feel we all long for.

SK: Now that you’ve made some solid laps around the track – what’s next? How do you keep the furnace for motoring burning?
BP: The next watch will be in partnership with a major manufacturer, and it will be our first contemporary supercar focus. Yes, it is’s uncharted territory, but I’m looking forward to raising the profile of the brand, and branching into a new audience. No question, I will continue to honor the past and draw inspiration from the great marques and drivers, which provide so much history. Stay tuned for what’s in store; I think you’re going to like it. 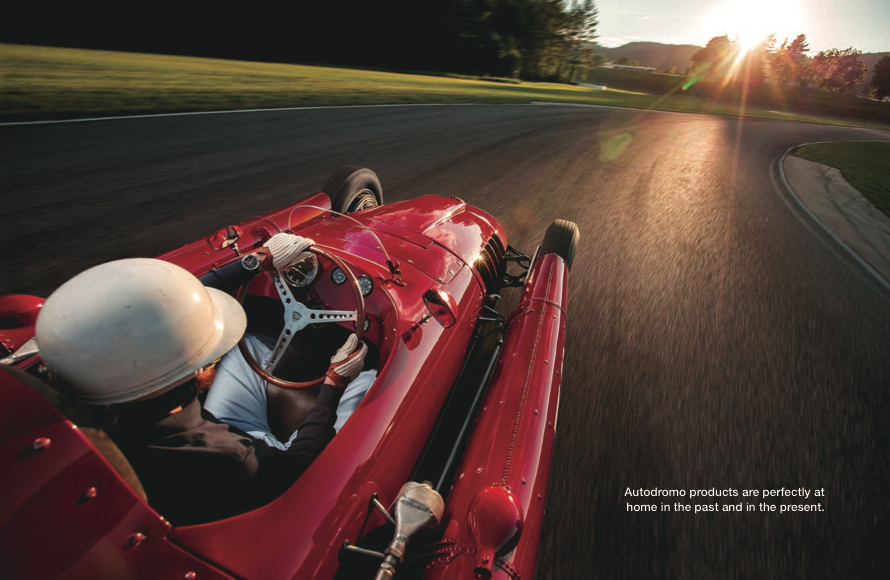