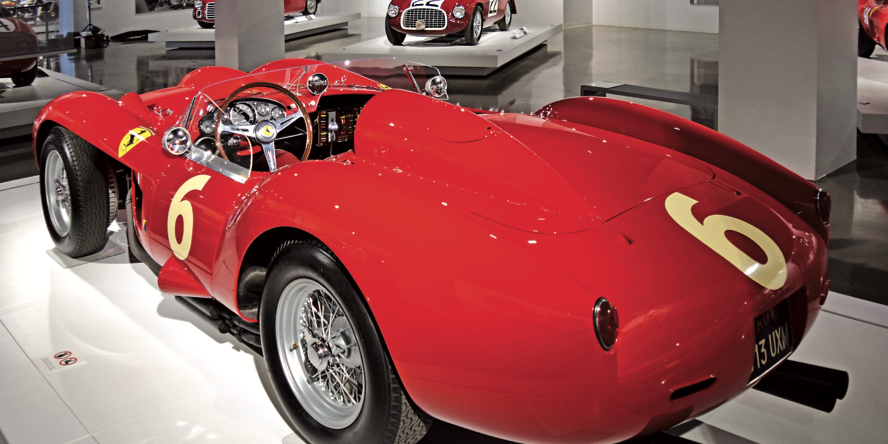 HAS IT BEEN SEVENTY YEARS ALREADY? Yes, seven decades of the prancing horse placed proudly on the fenders of Ferrari automobiles. On Thursday, April 27th, the
Petersen Automotive Museum debuted its latest and greatest exhibit, honoring the legendary automaker Enzo Ferrari. Held in the hub for all automobiles – Los Angeles, this display like none other came to the West Coast in honor of the famed manufacturer. Founded in 1947, Ferrari has been the benchmark for engineering and design, performance, and innovation. Fueled from the tracks in Europe to the roads of every continent on Earth, Ferrari carries the most recognizable badge in the
world, with over five thousand race victories in the company’s history.

For months, I had been interested and anxious to see what The Petersen Automotive Museum had to offer with their new exhibit, SEEING RED: 70 YEARS OF FERRARI. At every event and every chance I got, I asked questions to the likes of museum chairman and automotive rock star Bruce Meyer as well as collections manager Dana Williamson: What can I expect to see? Anything special you can tell me ahead of time? How many cars will you feature? What color Ferrari tie looks best with this suit I plan
on wearing for the event? No responses. Not a single spoiler was given, and I’m happier because of it.

“This new exhibit is another example of how the Petersen views cars – as art, and nothing is more appropriate than red Ferrari models,” said Terry Karges, executive director of the Petersen Automotive Museum. “We’re confident this exhibit will help us continue our success and really get people talking and learning about Ferrari.”

The Petersen offered an exclusive event before the exhibition’s public opening, and I was there with bells on and a VIP ticket. The VIP package included a pre-event Vault Tour of unexhibited cars. This particular tour featured Italian designed vehicles owned by the museum or on loan from collectors. We were treated to an
intimate look at a 275 GTB/4 NART Spyder, a one-of-ten Ferrari Sergio, and the infamous Corvette Scaglietti, to name a few. Our dedicated group of about one hundred also received a goodie bag and hardcover copy of FERRARI 70 YEARS by Dennis Adler.

After the tour, we were greeted by hundreds of eager patrons and a spread of appetizers and cocktails. Live music played as the “who’s who of Ferrari lore” in Southern
California trickled in, many of whom were proud members of the Ferrari Club of America.

A presentation honoring fabled American Ferrari racer Phil Hill was hosted by his son, Derek Hill, a respected driver in his own right and an avid Ferrari
enthusiast. Derek is a frequent attendee and emcee of events around the Los Angeles area and does a wonderful job in recounting events and highlighting our historical
heroes. Stories of his father and his connection with Ferrari, exactly one week after his would-be ninetieth birthday, were filled with personal sentiment and touched
us all. Bruce Meyers, founding chairman of the Petersen’s board of directors, was the obvious choice for ribbon cutter and was welcomed with cheers.

But, of course, we were here for the cars. A collection of Ferraris told the story of Enzo Ferrari and all tifosi who have had a hand in building the brand we cherish.
The crowd mingled and marveled like it was a parade, recounting the progression of cars – a legacy of machinery and metal that couldn’t be replicated in two lifetimes.
Something so pure and honest was in the room that night – a collective reverence and nostalgia for the marque and its heritage.

An exceptional selection of cars and vintage imagery was displayed in the Bruce Meyers Family Gallery on the museum’s second floor. True dual-purpose competition
cars like the 1958 250 Testa Rossa and the 1963 250 GTO were prominently featured with silkscreen backdrops, honoring the drivers who raced these cars to victory.
Recognizable road-going cars, such as a 1961 250 GT California Spyder and a 1949 166 MM Barchetta, lent variety to the presentation.

“We’re so thrilled to bring some of the world’s most beautiful Ferraris to The Petersen, said Meyer. “Seeing that rosso corsa paint and the beautiful curves of
the bodywork is always enough to make your heart skip a beat. SEEING RED will be one of the most significant gatherings of Ferraris in the world, and I’m so pleased to
be able to share it with the public in our gallery.”

SEEING RED: 70 YEARS OF FERRARI will be on display until May of 2018. The Petersen Automotive Museum is located at 6060 Wilshire Boulevard in Los Angeles, California.
Admission prices are $15 for general admission adults, $12 for seniors and students with ID, and $7 for children ages three to twelve. Active military with ID, personal care attendants, and children under three are admitted free. Museum hours are 10am to 6pm.