Good Stuff Down the Road-Via Corsa 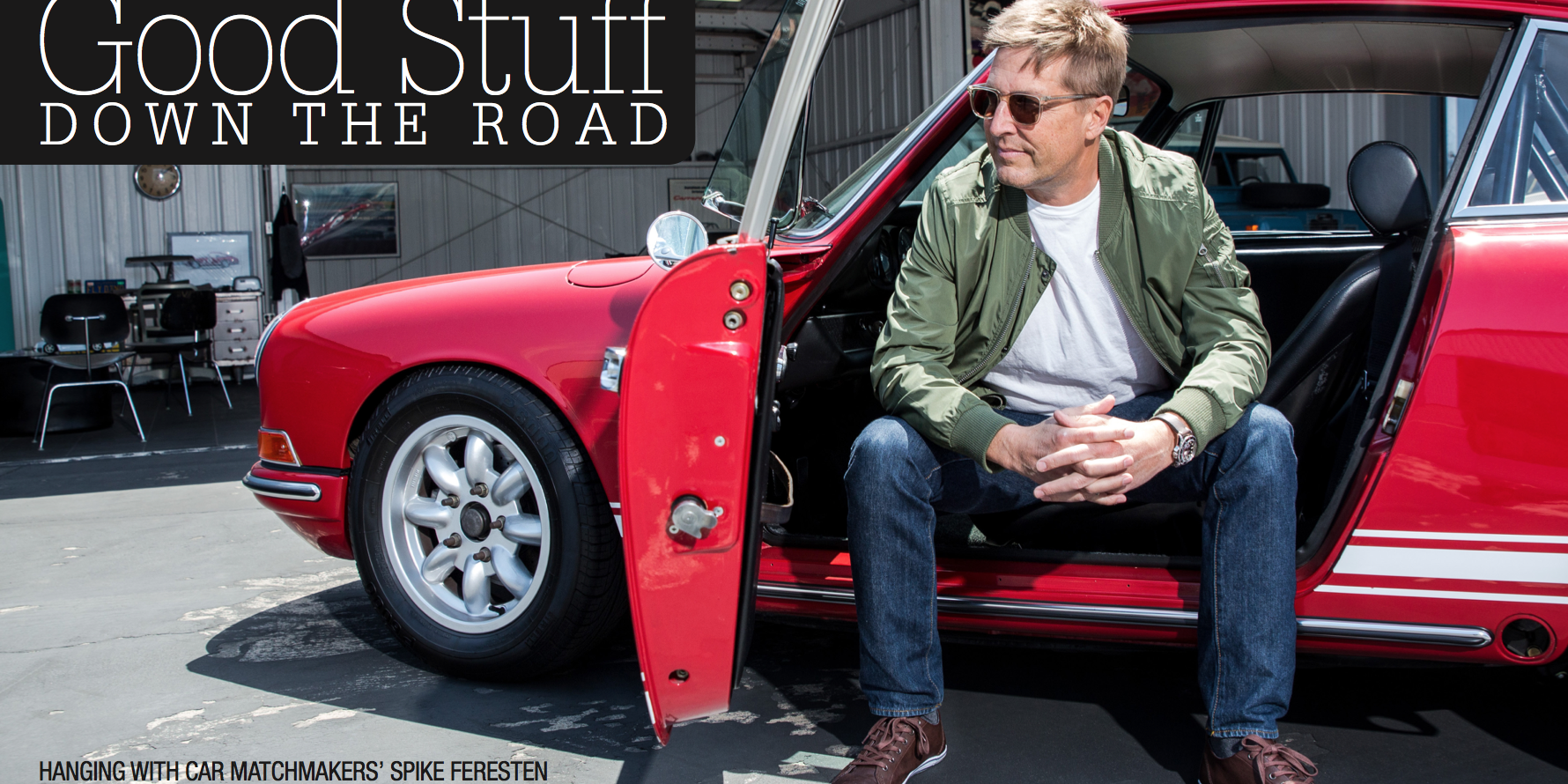 It was a typical day in California – one you would expect to have on a Sat-urday morning in May. I was with my MotorCar Studios and Luxury Bro-kers International crew, in from Philadelphia for the Greystone Concours d’Elegance in Beverly Hills. Our destination were the private hangers at the Santa Monica airport. Our mode of transportation was a 1972 Ferrari 365 GTC/4 and a stellar 15K mile VW bus, which seemed to be in great con-trast – until that is, we met up with Spike Feresten, host of the hit TV show Car Matchmaker on the Esquire Network. Greeted by his wildly unique VW German Police car which featured sirens and a CB radio, the sense of car community was as contagious as his smile.

We followed closely as he took us into his tucked-away man cave, which was dripping in automobilia and a mix match of exotic cars. His 1971 series 2A Land Rover Defender, a pair of Porsche GT3RS’s, and a Jaguar XKSS recreation car, all sitting side by side, as if it was supposed to be that way. Right away we felt at home, just as you should in Southern California.“Good morning guys. Why don’t you follow me!” The muffled speakers rang out in a cheerful and comical tone. We knew right away that this was supposed to be a fun time. How could it not be, coming from a man whose penned many funny lines for David Letterman and sitcom royalty, Seinfeld. Ever heard of the Soup Nazi? That was Spike with his bowl of jambalaya.

Our cars scattered around outside, we talked freely about the state of the market, being just a stone’s throw away from other hangers owned by Mr. Letterman, Ewan McGregor and the great Jerry Seinfeld himself.

After a long drive around the tarmac circling around vintage airplanes, private jets belonging to the likes of Tom Cruise, and dodging airport police in order to stretch the legs of his 1968 Porsche 911L factory lightweight, af-fectionately dubbed ‘8-Ball,’ Via Corsa sat down and got to know just how Spike is helping bring cool rides to common people and why the left coast is the best coast for classic cars.

Via Corsa: Let’s talk about the origins of Car Matchmaker and why this is a perfect fit for you as a car lover

Spike Feresten: If you’re a car guy or girl, people come to you for car advice.

Happens to all of us. I’ve just had a lot of luck putting friends, family members and business associates in cars they love. The year we cre-ated Car Matchmaker I had a hand in selling 20 cars – one of them just happened to be the executive producer of Oprah, Ellen Rakieten and she said, you’re very good at this. We should make a show. Car Matchmaker was born. We walked it into the Esquire network and they bought it in the room. It’s been a dream job for me ever since.

VC: I have to know, have you ever feared for your life when riding shotgun with a guest?

SF: Valium helps that. It’s true, there is an element of danger. Here’s why. I’ve got a stranger driving who has never been on TV before, 5 cameras in their face, driving a car they’ve never driven, and me next to them yammering stats and half-assed jokes (chuckles).

VC: It’s a little bit of sensory overload isn’t it?

SF: Look, when I’m driving and shooting the cold opening of the show—I occasionally get sloppy. We have one rule on the show – don’t kill the host – and if I sense someone being a little reckless, we have a chat with them. I did send a buyer home mid-episode. He was legit crazy. Legit.

VC: Cars, tattoos, what are we having for dinner…Not everyone can make decisions so quickly Spike! Have you ever had to step in and help your contestants pull the trigger on one car or another?

SF: Let’s face it. Most people don’t take car advice. If you’re reading this right now, and you’re a car guy, you know they usually just want to be heard, not advised. The advantage I have is that I can put them in my advice and let them drive my advice. Usually that’s where dawn breaks over Marblehead (laughs). They’ll say, “Now I get it. Now I understand why paddle shifters are fun,” which is why I always recommend people rent the car they want to buy first. Live with it for a few days. It’s a safer bet.

VC: The show has a simple formula and comes off as very approachable. How do you pull that off?

SF: People very quickly go down the rabbit hole when it comes to choosing their next car. We help them out of the rabbit hole by putting them in three choices. My producers and I take the choices very seriously. A car is a big investment and we want to make our buyers happy. And I’m happy doing this show. I’ve been lucky that the execs at Es-quire Network gave us the creative freedom to create the format. It’s been an absolute joy to come to work and in television that’s rare.

VC: The Southern California car culture is like nothing else in the world – what makes it so special for you?

SF: First, there’s a passion for all cars big and small. On the weekend you see everyone out driving their metal. Ferraris, Porsches – I once saw a group of old ladies in Austin Healey’s running around the canyons (chuck-les). For me, the passion to get out and drive is what bonds us together. Secondly, there is an instant friendship and acceptance among us car people. I recently spoke to Dicky Smothers about it. It’s why he and his broth-er started Smother’s Brothers Racing back in the day. The car people were way friendlier than the TV people. Still true. 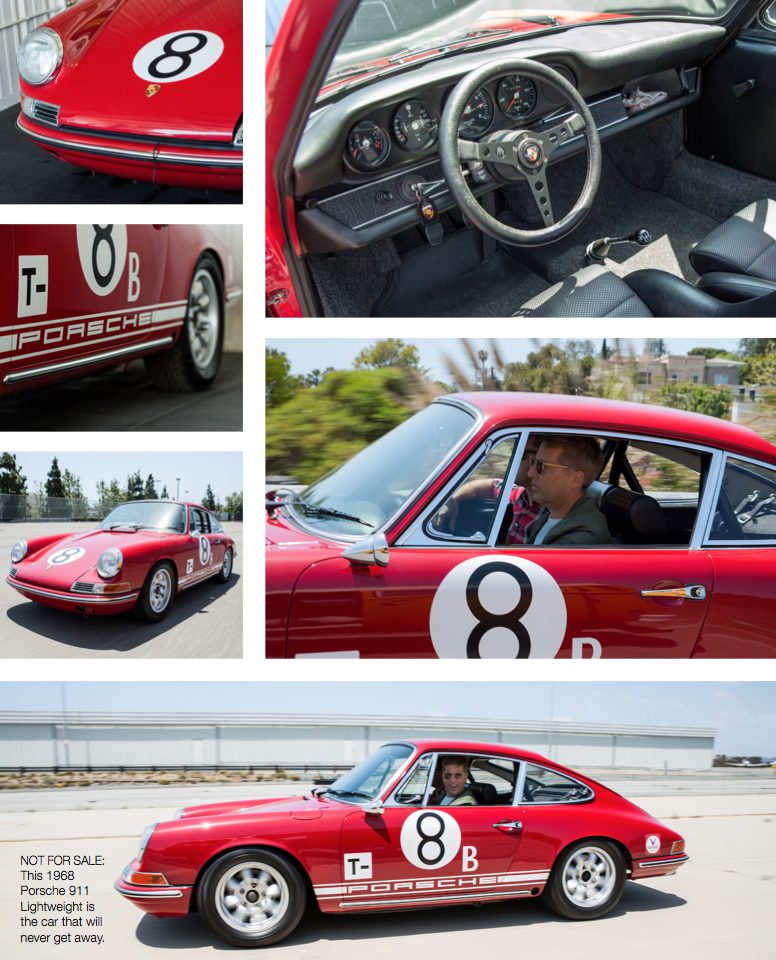 VC: What haven’t you done in a car that you’re dying to do? I just saw you racing around at the Long Beach Grand Prix with Mario Andretti – was that one of them?

SF: That’s a good question. I have not gone drag racing yet. YET. I have not done any jumping of any kind. I have not caught air (chuckles). I was in an amphicar this year on the show, so now I can say I’ve done that.

You know, I talk to Seinfeld about this a lot. Show business is professional racing to us, where at any moment we can have a glorious victory, or we crash, burn, explode or loose a limb… Very publicly I might add. So driving for me is more about getting out on the road on a beautiful day having a nice cruise and relaxing. I like racing, but it’s not a priority.

Now as far as Mario Andretti, that was partly for me and partly to show off for my kids. The Indy people invited me to Long Beach for a ride along with Mario. It was an incredible experience. I loved it. Scary fast. The talent these guys possess. So cool.

VC: Let’s go back and talk about the ah-ha moment for you when it came to cars as a child. What was the match that sparked it all?

SF: The first car that really caught my attention was my mom’s Honda Accord. It was an import and it had a 5-speed manual transmission. Love at first sight. I was taught to loathe foreign cars in the blue collar Mas-sachusetts town where I grew up. But I was

Then years later David Letterman let me drive the cars he kept here at Santa Mon-ica Airport. Porsches, Ferraris and Austin Healeys. A ’58 Speedster, a 914-6,A Dino

– most of the cars I had never heard of. But each one of them blew my mind. My precon-ceived notions about Porsches in particular, what kind of douche drove them, went out the door. They were a simple focused driving experience with nothing extra. No power steering, no power brakes, no computer chips. I fell for brand hard that day.

VC: Your relationship with Jerry Seinfeld goes back over 20 years from your time as a writer and producer on the show – do you feel your friendship is even stronger today with your daily involvements in the collector car and Porsche world?

SF: For sure. Look my wife will only talk cars for about five minutes before she makes an excuse and disappears. I’m fortunate to have Jerry and a small group of guys who if left to our own devices would talk cars 24/7 until we had heart attacks and died from malnutrition. It’s friendship or maybe we’re just a group of addicted lower companions. Either way I don’t care. As long as nothing threatens that fun for us. I believe our car group text thread is going to go on for years. We had a nice five-month long text discus-

sion about his cars being sold at Gooding in Amelia. It was so much fun.

VC: Collector cars have always been associated with wealth, culture and class – how will the next generation find their foothold in the industry? What will the landscape look like in the next 20 years?

SF: Well, there’s no way to predict it. But when I attend car shows like Luftgekühlt, where cool people with cool cars meet and hang without the concours stuff… I like what the future holds. I was at dinner a couple of years ago during Monterey Car Week with

I turned to my friend and said geez, the car hobby is alive and well with the younger generation. They’ll be dead soon, but the car thing has never been bigger.

VC: What’s next? Personally and professionally.

SF: I started a production company a year ago, Hangar 56 Media, and we’ve been producing a lot of new car content and a project with Magnus Walker at the History Channel, with a bunch more down the pipe-line. I’m loving the ride I’m on right now. I may never get back to comedy. Good stuff. Why pull over?