The Strange and the True-The Prancing Horse 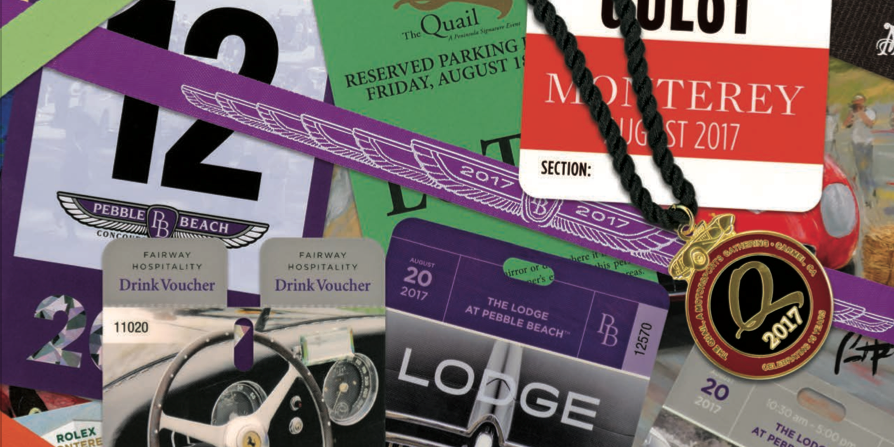 BY THE TIME YOU READ THIS, ALL OF THE CARS HAVE already been loaded up on their transports headed back home, or off to a new garage. Vendors have broken down, cleaned up and boxed their goods for next year. The race track is silent, cold, and just a large empty stretch of road tucked away in the Salinas foothills. Judges hats and nametags are hung up for the year. Monterey car week has come to an end. But this cannot be the last of it, right? What about the memories, the tall tales and badges of honor you earned by driving the thousand miles to get there in a fifty-year-old car? Or that time you and Jay Leno shared a drink at Baja Cantina? How about when
you were given that ticket to that sold-out event just the day of? These memoirs of Monterey are what keep us coming back year after year and strengthen our bonds
in the collector car world. Let’s talk with some FCA members about just a few of those special moments…

“IN THE LATE 2000s I was working for a highprofile Ferrari restoration shop and we had a wellknown Ferrari 250 GTO headed to Pebble Beach. Everything was as planned – the car was road tested, pulling strong and without any failures. Thursday before Pebble we were on the Tour and the car was running great, until we felt something in the engine. Upon further inspection, we found that one of the carburetors had swallowed a stone! Not to panic, we dug a little deeper as the hours grew late and
found that we had bent a valve. Okay – time to panic! At around 3:30am Sunday morning, myself and the restoration shop owner snuck out to the car parked at the Equestrian Center lot to make the repair. I pulled the valve cover off, removed the rocker arm and the companion arm as well. Without any sleep, we got the
car onto the lawn. The GTO was judged and did very well that year, and no one was ever the wiser that it was running on eleven of twelve cylinders!
– ANONYMOUS

“ON APRIL 7, 2015, A LITTLE KNOWN 400 SUPERAMERICA Aerodinamico Coupe, arrived in the US via Miami, Florida. A true Ferrari preservation sample that will keep on giving moments of enjoyment and surprise to present and future custodians. It checked all the boxes, requirements and expectations to become a great Pebble Beach Concours d’Elegance preservation class candidate – which was in 2015. Just after being informed that the car was chosen for a class award, and were asked to drive towards the edge of the ramp, the unexpected happened. It was the unforgiving drain of the battery capacity to properly propel the electrical gas pump. Numerous
tries, borrowed battery packs, persistent mechanical knocking magic on the gas pump case, and a plea to the carburetors to spark and combust to get the car running. The custodian and wife, in the longest, most nerve-racking, and ironically short drive of their life, finally made it to the edge of the awards ramp. For a
minute, we believed we had succeeded but of course the engine died right before starting to cross the “finish line!”

Throughout all the chaos, we kept reciting to the line of Pebble Beach stewards who helped guide the cars, “We’ve come a long way and will not give up.” For a moment,
we thought we had lost the opportunity to reach the podium! When the steward announced that we could push the car over the ramp to receive the award, it was a clear gesture of recognition and respect for this Ferrari’s preservation quality. Moving forward from this small hiccup, the 1961 400 Superamerica, chassis 2809SA, competed
at the FCA’s 2016 Annual Meet in Columbus, Ohio, and was acknowledged as the “Outstanding Ferrari road car” with the “Luigi Chinetti Award.” This was quite an accomplishment for an originally preserved Ferrari.”
– ENRIQUE SENIOR

“IN 1982 I WAS ASKED TO JOIN THE PRANCING HORSE Racing Team owned by Ron Spangler. We flew to Belgium and went to Garage Francorchamps to take delivery of a new 512
BB/LM from Jacques Swaters. After test laps at Spa, the car was transported to Le Mans and qualified in 44th position. The car ran well and we finished 3rd in our class (GTX) and 6th overall. The car was returned to the US and was not raced again. At this year’s Pebble Beach concours my 599 GTB was selected to be
shown in the Ferrari 70th Anniversary display. As we were in line to drive onto the lawn I spotted a 512 BB/LM ahead of me and thought here is a car with our original race number 70 on the side, it must be numbered because of the anniversary celebration. We followed the directions to line up the cars, and there was only
one car parked between us. I quickly ran over and found our car from thirty-five years ago! It had no work or restoration done to it, it was exactly as ran in its only race. Then the owner, Jim Fuchs, came over and asked me to get behind the wheel so they could take pictures. A crowd soon came around the car, and Jim said,
“Richard do you want to start the car?”

I replied, “Oh yeah!”
We let it warm up and the crowd got larger, then I blipped the throttle and thirty-five years of my life wound down, and I was back at LeMans.”
– RICHARD COLE

PERSONALLY, I’M CELEBRATING MY ELEVENTH
year on the Monterey Peninsula and my ninth year involved with Pebble Beach and the surrounding events. Every year seems to be a little bit different and, honestly, much better as the years go on. You can’t do it all – its impossible – but you try anyway, don’t you? Personally, I’ve selected some events, rallies, dinners or gatherings that I do every single year, and plan to for as long as I can. Others that fill the week I want to experience for the first time, and I save some for the next year to keep it interesting.

One right-of-passage I took five years ago was what’s commonly known as dawn patrol for the Pebble Beach Concours. You know what I’m talking about – the small group of crazy guys and girls that meet in the pitch black, cold and foggy weather in order to witness the first cars to grace the 18th fairway. Over the years it has grown more into a commercial event with Hagerty Insurance hosting the official dawn patrol, with a coffee and donut reward for getting up at 5am after an already exhausting week of long days and late nights. Ahh, but there’s more! Pride is on the line and there is proof to be worn for all to see that you’ve been there and earned it. The infamous dawn patrol hat. A limited run of floppy dad hats that have come in an array of colors over the years and can only be obtained by fate, pure luck, or
knowing someone who knows someone.

It was my luck that in my first year at dawn patrol I scored the prize from a very nice Hagerty girl who was nearly mobbed for the coveted hats. I picked her off the ground and she handed me a cap stashed in her jacket. Feeling awake and full of pride, I took my first stroll down the fairway. Just to the left was a 1958 250 Testa Rossa parked, nonrunning, with a concerned-looking driver. I approached the man, who I learned to be with Motion Products. Flustered, he told me that all the
starting-and-stopping of the morning had killed the battery. Panicking, he was going to run back to the truck for a jumper. I knew the 250 Testa Rossas were not judged cars that day, but for display only. I said we could push the car down the fairway to its spot and worry about the battery later. It was the best option as other cars whizzed past us and the sun finally started to shine through.

Just then longtime FCA member, Kevin Caulfield, approached us and quickly understood what we were doing. Next thing I knew, we are all jogging down the fairway – as fast as you can on wet grass – yelling for someone to tell us where we needed to be. This year was the furthest any cars had been displayed at Pebble Beach (wonderful!) so we had to travel most of the 543-yard par 5 to get placed. The looks of the other entrants were priceless and I’ll never forget the cheers from
the spectators. We got the car on its mark and took a few deep breaths. To my surprise, the man representing the car told me to climb in for a few earned pictures. It was a surreal moment as I hopped into the Scaglietti spyder (0756TR) for a number of unobstructed pictures. People gathered and photographers tapped their toes as they waited for us to finish. It was the highlight of my career at the time and the picture hangs in my office. I reminded Kevin of this tale in August. He causally
smiled and winked at me, spoke under his breadth and said, “Well that’s just the magic of Monterey, Steven.”