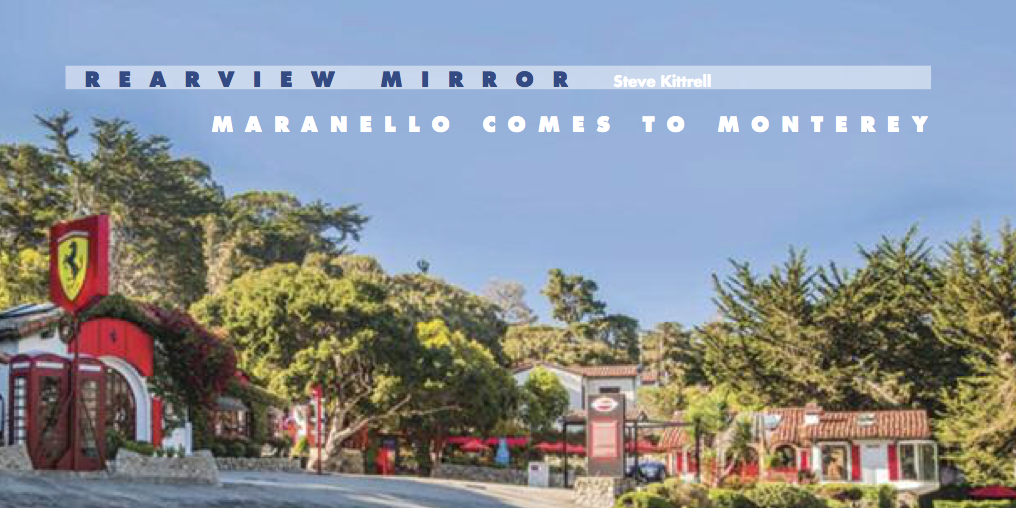 Ferrari North America debuted Casa Ferrari Carmel during this year’s Monterey car week as a way of connecting its clients coast to coast and around the world. Located south of Carmel- by-the-Sea, and off the world-famous Pacific Coast Highway 1, Casa Ferrari Carmel was a friendly and fitting tribute to the historic Fiorano test circuit home and office of Enzo Ferrari.

FERRARI LOVERS OLD AND NEW, DOMESTIC AND INTERNATIONAL, mingled together from Wednesday, August 12th through Sunday the 16th. Visitors enjoyed sights and sounds that made you feel as though you were in an Italian courtyard or, better yet, a hundred yards away from the Big Sur coastline. The central coast weather performed in spectacular fashion – even being a touch warmer than usual for this time of year.

As a resident on the Monterey Peninsula, I was first slightly skeptical regarding the placement of this Ferrari hub, which was to host numerous activities for
its VIP guests. The tight and winding southbound route to the normally tranquil vintage filling station, was a bit out of the way from any other car week activity.
The lack of parking surrounding the vacant art studio, tight row of gas pumps, minimal socializing space and test drive areas put immediate doubt in my mind
that Ferrari could pull off such a big event here in the Carmel Highlands. Upon arriving the Sunday before, my doubts were quickly laid to rest as the setup
had already begun and the vision started to sharpen.

After speaking to clients and friends during the week about their experiences at Casa Ferrari Carmel, I returned again to the scene on Saturday around 4pm, expecting the automotive zoo I’ve witnessed everywhere else. This was a pocket of time shortly after Concorso Italiano and before the annual Barnyard Ferrari Event, giving enthusiasts enough of a window to visit Casa Ferrari Carmel before heading off to the many auctions or evening activities. As I approached the site, I noticed that the incoming traffic was not nearly as bad as I had expected, and finding parking just off Highway 1 was a breeze. Surrounded by many different Ferrari makes and models, I was immediately encircled by the notes of Ferrari automobiles from the Enzo era to the modern supercar. LaFerraris, 308s and Daytonas all co-mingled with egg crate
and carbon fiber smiles.

For decades, Shell gasoline has been a supporter of Ferrari at large, and their on-site presence called The Pit Stop was wonderful at providing full fill-up service,
prime parking for attendees and goodie bag offerings to FCA members. Normally known as a quaint little snack shack near the pumps, this Spanish revival styled space was transformed into a full Ferrari store, offering their newest line of clothing and logoed apparel. Your desired item not in stock? Their staff was ready and able to place an order and have it delivered by the time you got home.

On the south side of the grounds was the rotating display of classic race Ferraris dubbed, The Piazza. From a recently restored and Ferrari Classiche certified 500 Mondial PF spyder, to the 24 Hours of Le Mans class-winning 275 GTB/C Speciale (6885), Ferrari North America proudly showcased its racing roots for all to see.
Entering the gated Caffé Ferrari courtyard, I was warmly greeted by FNA staffers who invited me to enjoy the food, faire and most importantly, the bottomless gelato.

I was fortunate enough to fraternize with friends and clients, but also with FNA officials, including Edwin Fenech, president and CEO of Ferrari North America, who said, “It was an oasis for Ferraristi during a beautiful and busy Monterey car week where Ferrari once again played a starring role.”

Inside, the converted art studio exhibited exactly what Ferrari has done better than any other automotive manufacturer – catering to their loyal fan base with its concierge service. Casa Enzo was an open-door policy environment, welcoming many to take shade and make new friends. Feeling festive and spontaneous, or just haven’t had time to visit the factory recently? The expert Ferrari staff of the Tailor-Made Programme was eager to design a fully bespoke automobile to fit your taste and personal style – and I was able to witness the entire process from a longtime Ferrari purchaser. Later, an exclusive VIP reception was held in private downstairs quarters. Although I was told not to speak about its details, I can assure you it was first-class and the company was of Ferrari royalty.

“Casa Ferrari Carmel was much appreciated by our clients and fans alike. More than 750 vintage and modern Ferraris stopped by the Piazza, and Casa Enzo was an intimate
gathering place reminiscent of a little piece of Maranello,” Fenech would later say.

What’s a Ferrari event without test drives? A selection including a pair of California Ts, F12berlinetta, the FF and the brand new 488 GTB was available, first-come, first-served. As predicated, the waiting list to tour the central coast’s back roads was long indeed, but the reactions from the lucky drivers spoke volumes about the cars’ performances.

By and large, Casa Ferrari Carmel provided a factory experience with a California flare. Its staff was the most knowledgeable and inviting I encountered all week, and I attended many different events. The market is strong, the brand is stronger and my faith in Ferrari during car week is fully restored. Is it August yet?