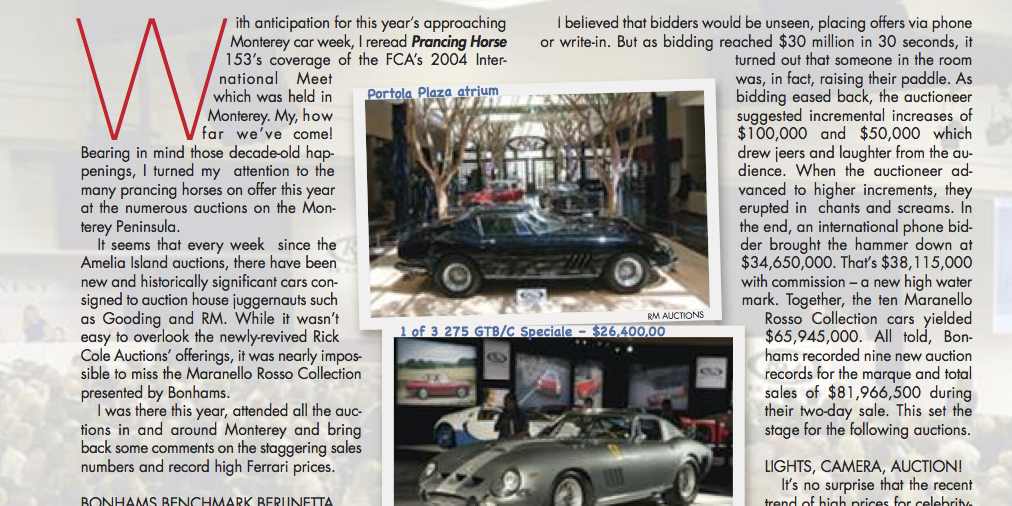 With anticipation for this year’s approaching Monterey car week, I reread Prancing Horse 153’s coverage of the FCA’s 2004 International Meet which was held in Monterey. My, how far we’ve come! Bearing in mind those decade-old happenings, I turned my attention to the many prancing horses on offer this year at the numerous auctions on the Monterey Peninsula.

It seems that every week since the Amelia Island auctions, there have been new and historically significant cars consigned to auction house juggernauts such
as Gooding and RM. While it wasn’t easy to overlook the newly-revived Rick Cole Auctions’ offerings, it was nearly impossible to miss the Maranello Rosso Collection
presented by Bonhams.

I was there this year, attended all the auctions in and around Monterey and bring back some comments on the staggering sales numbers and record high Ferrari prices.

BONHAMS BENCHMARK BERLINETTA
Much attention was directed towards Bonhams’ Thursday auction in Carmel showcasing ten Ferraris from the Maranello Rosso Collection. The ex-Phil Hill 250 Mille
Miglia Berlinetta, a 1978 312 T3 Formula 1 racer and a 1969 250 SWB Aerodinamica, presented with its original motor separately, all sold at no reserve. The star of the auction and market focal point, however, was the 1962 250 GTO (3851 GT). The first GTO offered publicly in a quarter century, it made the fifth world record-breaking price at auction in six years.

An hour before the auction was to start, the room filled with reporters, media bloggers, photographers and spectators wanting to witness history. Talk of a GTO sale price around 55 to 75 million dollars, which had started days earlier, continued through the delay issued by Bonhams as many registered bidders where stuck in heavy Highway 1 traffic. And minutes before the sale, a betting pool developed in the press seating section, ten rows back from the stage.

I believed that bidders would be unseen, placing offers via phone or write-in. But as bidding reached $30 million in 30 seconds, it turned out that someone in the room
was, in fact, raising their paddle. As bidding eased back, the auctioneer suggested incremental increases of $100,000 and $50,000 which drew jeers and laughter from the audience. When the auctioneer advanced to higher increments, they erupted in chants and screams. In the end, an international phone bidder brought the hammer down at $34,650,000. That’s $38,115,000 with commission – a new high water mark. Together, the ten Maranello Rosso Collection cars yielded $65,945,000. All told, Bonhams recorded nine new auction records for the marque and total sales of $81,966,500 during their two-day sale. This set the stage for the following auctions.

LIGHTS, CAMERA, AUCTION!
It’s no surprise that the recent trend of high prices for celebrityowned cars held true in Monterey. RM’s sale at the Portola Plaza had a spotlight on yet another storied Steve McQueen Ferrari, the 1967 275 GTB/4 that was delivered to him while filming Bullitt in San Francisco. (It was also owned later by Lost in Space and Zorro star Guy Williams.) Converted to a NART spider along the way, it was later purchased by Australian race driver and Indy 500 participant Vern Schuppan who sourced
many parts from T. Rutlands West, then sent it off for a Ferrari factory restoration and Classiche certification.

Once finished, it was exhibited at the Museo Ferrari in Italy and at The Peterson Museum in California where it sat next to McQueen’s Jaguar XKSS. This car was ready for its closeup – and did it ever perform. The packed Saturday night audience saw the car’s provenance fetch a $10,175,000 realized price. After all these years, Steve McQueen can still work a room without saying a word.

SOMETHING OLD, SOMETHING NEW
Rick Cole has been a staple on the Monterey Peninsula since holding the very first collector car auction there. This year, their old format was fast forwarded into the digital age, allowing bidders to submit via laptop, tablet or smartphone from anywhere in the world. Tucked into the second floor of the Marriott in Monterey, Rick Cole Auctions displayed 13 excellent examples for bidding. With $21,524,900 in Ferrari sales, as of midnight Monday morning when their auction was officially over, one could call this a success. However, their two star cars, the 410 Sport and 250 GT SWB did not meet their reserves of $19.5 million and $8.4 million respectively. A 250 Lusso and the 1,001 mile F40 also did not sell, but could see pending sales post-auction.

EVERYONE GETTING IN ON THE ACTION
Russo and Steele’s auction on the Monterey Warf waterfront also had a strong selling of blue chip sports cars, which included ten Ferraris and a total of $2,278,200, with only a 1967 330 2+2 failing to sell. A well-sorted 1972 365 GTB/4 Daytona sold for a solid $731,500 and a 1964 330 America realizing $505,000 was anotherhighlight. Mecum also got into the Ferrari frenzy offering 13 cars during their daytime sale. Unfortunately, they failed to hammer on six of them including their star and cover car, the 1954 375 MM Spider (0362 AM). This was last year’s Concours on the Avenue Best of Show winner and was displayed in downtown Carmel-by-the-Sea prior to the auction. Even with its excellent and recent restoration, it couldn’t find a buyer in this audience. Mecum did manage to find a new home for a 1961 250 GT Series II Cabriolet with only 3,230 original miles for $2.2 million. The always-crowded house at the Hyatt Hotel posted a total of $2,786,000 million for the week.

THE LAST CALL FOR MONTEREY CAR WEEK
All good things must come to an end, and after the Pebble Beach Concours d’Elegance on Sunday, all that was left was the Gooding & Company auction. With 23 Ferraris
offered by David Gooding and staff, they had an impressive $42,982,500 recorded total over their weekend sale. As always, Sunday night at Gooding yielded large crowd,
including TV personalities Wayne Carini and Jay Leno, walking over from a long day on the 18th green to the standing room only tent to see what headlining sales would
round out the week.

An extremely rare and visually interesting 1966 365 P Berlinetta Speciale “tre posti” drew much attention. The first Ferrari mid-engine 12-cylinder model, its driver’s seat located between two passenger seats, reached a high bid of $22.5 million but did not sell. The crowd expressed surprise and disappointment. Sunday’s cover car,
a 1962 250 GT SWB Berlinetta that was exceptionally original and well documented by Marcel Massini, failed to meet its reserve of $10 million. Gooding’s highlight was a robust $15,180,000 for a beautiful 1961 250 GT SWB California Spider.

IF NOT NOW, WHEN?
What can we conclude from $233,275,350 in Ferrari sales at Pebble Beach? How do we account for the fact that half of the top 100 sales from all six auction houses wore prancing horse badges? It should be obvious that there is extreme confidence in the collector car market, and none more so than in the Ferrari marque. These
jumps in values, unlike any seen in 20 years, show no sign of slowing down. Our automotive universe has expanded to new investors and in new areas of the world. The small road we’ve all been traveling has been widened due, in part, to heavy new media auction coverage now reach millions of viewers instantly.

Many believed a less than stratospheric price for the GTO at Bonhams Thursday sale would calm the pace for the rest of the weekend. That’s not exactly what happened. While the public’s inflated value was not met, the weekend confirmed that collectors and investors are generally very willing to pay big bucks for blue chip post-war sports cars.

You have to pay to play. We’re seeing some significant collections breaking up and highly collectable cars being liberated from garages for lucrative sales at the venues proven to produce them. It’s thrilling to be a spectator in this currently active arena.