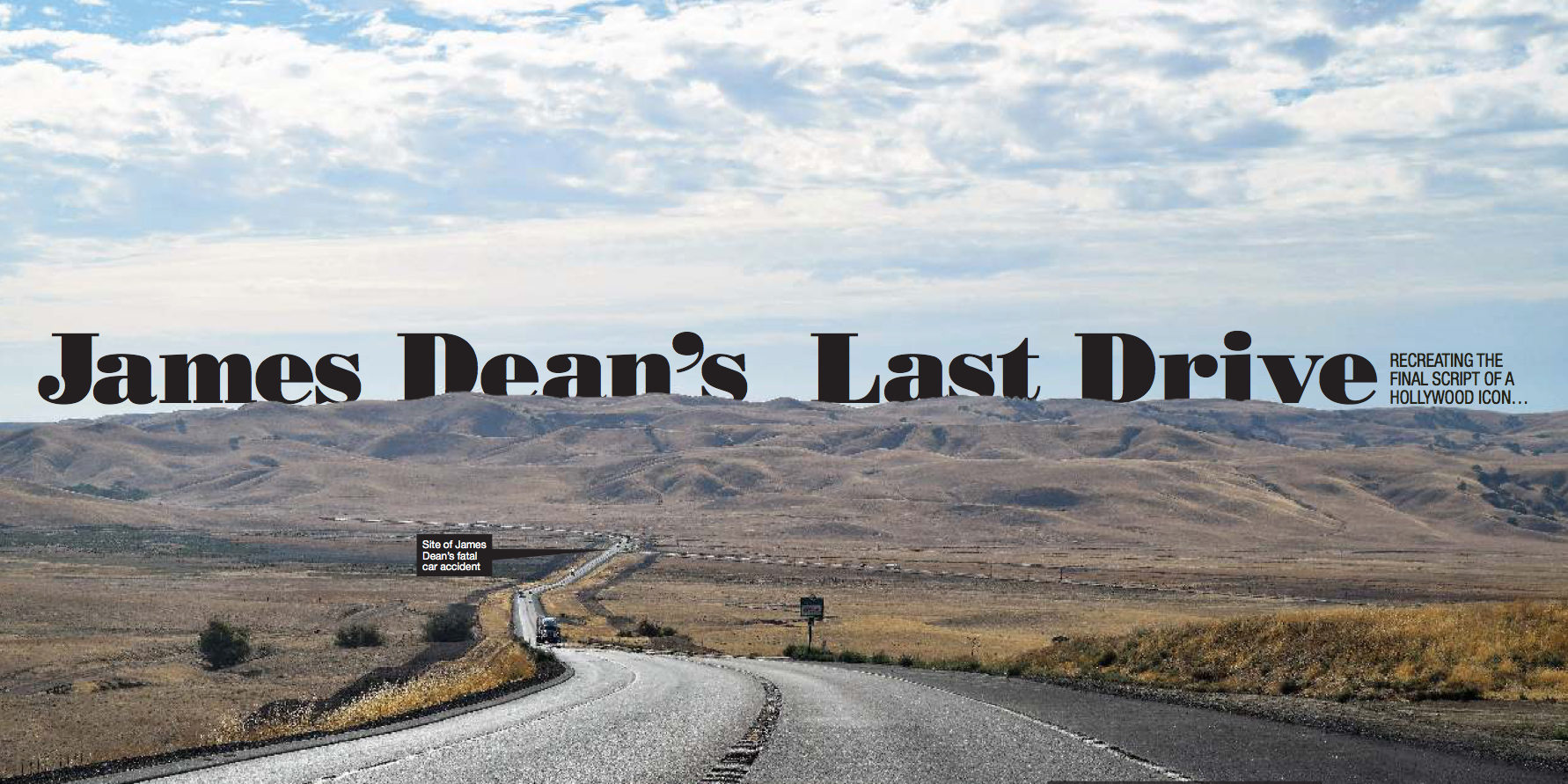 It’s been over 60 years since Bill Haley and his Comets topped the charts with “Rock Around the Clock” and icons like Marlon Brando and Frank Sinatra were starring in Guys and Dolls on the Main street of every American city. The Brooklyn Dodgers and New York Yankees battled in a World Series game, Walt Disney opened his theme park to the public and The Ed Sullivan Show entertained us every night. Was this the greatest era of Americana? Well, that will always be the $64,000 question.

This was also the same time a young, budding star was stealing the hearts of young girls and influencing every rebellious boy who had dreams of Hollywood stardom. A rebel without a cause – James Byron Dean – left us heartbroken and shocked on September 30, 1955 when he was found on old CA-46, 19 miles east of the mid-state town of Paso Robles, wrecked in his week-old Porsche 550 Spyder racecar.

It was the beginning of teenage disillusionment, and Jimmy was a major influencer on the disaffected youth who helped light the fire in the changing times then, and for many years to come. Called out by the media for his tendency to drive too fast on backstreets and the Southern California roadways in his Porsche 356, he vowed to keep his high speeds to the track, only weeks before his fatal last drive.

Purchased new from famed team owner and racer, Johnny Von Newman at Competition Motors in Hollywood, California, was a brand new Porsche 550, spotted by his best friend Lew Bracker. Dean was always pushing the envelope, especially after getting a taste of racing success on the old tracks in Southern California. It was a simpler time in American history, one that event organizer Shannon Wafford vowed to recreate.

“My first exposure to James Dean as a kid came from the poster Fonzie had of him on Happy Days and The Fonz mentioning, ‘The only people who understand cool are me and James Dean.’ Sixty years later here we are still trying to understand Dean himself,”ponders Wafford.

This time it was to be different. A group of dedicated men and women stretching as far as England, France, and Germany and across the United States were excited to honor his journey, his passion for racing and his love for the road. We were all determined to make it to his final destination.

Our automotive passage mirrored the one of Jimmy’s on that fateful date, beginning on North 1219 Vine St. in Hollywood, exactly where Competition Motors sold Dean his Porsche. Wafford warmly greeted the 20 or so time travelers with open arms and a promise of safe passage down memory lane.

Heading North on Hwy 101, we ventured to what was once the filling station James stopped at before his trip with friend and Porsche factory wrench, Rolf Wütherich. ‘A Touch of Romance’ flower shop now resides there – also famed for being a location for the popular TV show, Six Feet Under. It was here that the day started to take shape for the participants and the presence of James Dean was upon us. A crowd of spectators gathered from the adjacent carwash and auto body shop as they recognized the famous car. Not knowing it was the anniversary of his death, a woman gasped when told of our journey and a subtle ‘God Speed’ was spoken under the breath of another man. A quick recreation of an iconic picture of James putting on his driving gloves, cigarette pressed between his lips, and we were off for the next destination.

Speeding down the I-5 North freeway, with what seemed like the rest of LA, our committed crew looked down the steep Grapevine – a 1,499 foot grade that ascends the canyon to the Tejon Pass in the Tehachapi Mountains. It was here, just off the Hwy 166 exit, that James received a speeding ticket for going 65 in a 55 MPH zone by Officer Otie Hunter. James Dean markings and insignia could be found on and near the telephone pole where he was issued the violation. A Central California fruit orchard proved to be a picture perfect backdrop as we immediately stepped back into the 1950s.

The next leg of our trip provided stunning views of the California valley. This was the beginning of what has been dubbed “Racer’s Road,” an anticipated target and marker for our pilgrimage that we were eager to begin. From desolated and dormant oil derricks to the lush fruit of Bakersfield farmland, it was a time to reflect on why we were all there that day.

Russ Rodriguez and Alberto Gonzalez, owners and builders of the 1955 Porsche 550 Spyder replica, saw the trip as an opportunity to honor the fallen star, and partake of a classic trip to the Central Coast.

“We really enjoyed recreating Jimmy’s last drive in the Spyder in our hand-built Fiber Steel replica car, which is as close to the original as possible. It was interesting to me that he would drive so far to enter his new Spyder in an airport race, but that was a sign of the times,” Rodriguez says.

He elaborates on just how times have changed. “Today we take long drives for granted because we all seem to drive longer and farther on a regular basis, however back in the mid-50s most people did not travel very far from home. The other thing that struck me was how many people recognized the Spyder as we drove on the memorial trail. We got lots of thumbsups and many people hanging out of their cars to snap a photo of us in the Spyder. James Dean still means something to many people.”

As they barreled down the back roads in the most primitive car on the drive – a no A/C, radio deleted, full synchro gear-boxed roadster – Shannon Wafford and myself enjoyed the luxury of a brand new 2015 Porsche Boxster. Donated for the drive by Porsche of Monterey, it was a perfect combination of practical sports car power, while drawing on past stylings of its Porsche predecessors, like the 550.

Not a pedestrian car in sight, we were only slowed down by the occasional oil rig truck or farm vehicle making its way to the next row of crops. We all playfully passed each other before reaching CA-33 towards Taft, a small city in the foothills at the furthest southwestern edge of the San Joaquin Valley, with a population under 10,000 people.

Reaching what many travelers recognize as the main James Dean attraction was the Texaco Gas Station which is known as Blackwell’s Corner. This was Jimmy’s last stop before the fatal crash, now updated with vibrant and realistic wooden Dean portraits for motorists to see from the newly paved Hwy 46. Over the years, there have been dozens of James Dean books that recall this trip, many disputing what the last author had written. You decide if he ate an apple and a Coke, or an apple pie and milk. Either way, you must stop into this renovated filling station or 50s diner filled with Marilyn Monroe, James Dean and Elvis Presley memorabilia.

The California sun was blazing that day and just as Dean had we were racing right into the sunset with only miles to go before reaching the crash site. Warmly greeted by many other enthusiasts ready for our arrival, it was an equally sobering and rewarding feeling as we pulled the 550 Spyder right up against the fragile Jack Ranch farming fence. Many brought items to leave, and many items looked to have been there for years.

A more uplifting and celebratory stop was a half mile from the crash, the Jack Ranch Café, where a permanent memorial is staged around a large oak tree. Dozens of classic Porsches were already parked, many of which were present for the 50th anniversary. Acclaimed James Dean author and historian Warren Beath, was happy to discuss his thoughts and feelings that day along with a life-long Dean enthusiast and impersonator who attends every year.

Details of the crash and scrutiny of blame was not important to anyone that day. We had a mission to complete and nearly two hours to go. It was a race against the dying of the light paralleled with the iconic Salinas Valley landscape. Waiting for us was a celebration at the Salinas airport, organized and supported by community director Patricia Triumpho Sullivan.

“Folks really got into the spirit of the festival: dressing up, bringing their classic cars to display for the evening and welcoming those who made the drive all the way from Hollywood. Many attendees enjoyed the ‘James Dean Menu’ dinner at the Landing Zone restaurant, and we all enjoyed the James Dean memorabilia exhibit,” says Sullivan. “Dean is such an iconic figure in today’s pop culture that he inspires even the local youth to get involved. We were all surprised at the number of inquiries we had from teens who want to be a part of next year’s festival.”

Fuel tanks were low, but spirits were high as we turned into the airport tarmac. Music and drinks were enjoyed along with many donated James Dean artifacts. The party was followed by a free showing of “Rebel Without a Cause” at the Maya Cinema in downtown Salinas. With hundreds of fans to hear our story of the 10 hour journey – the one Jimmy himself didn’t complete – it felt like a tale fit only for Hollywood.