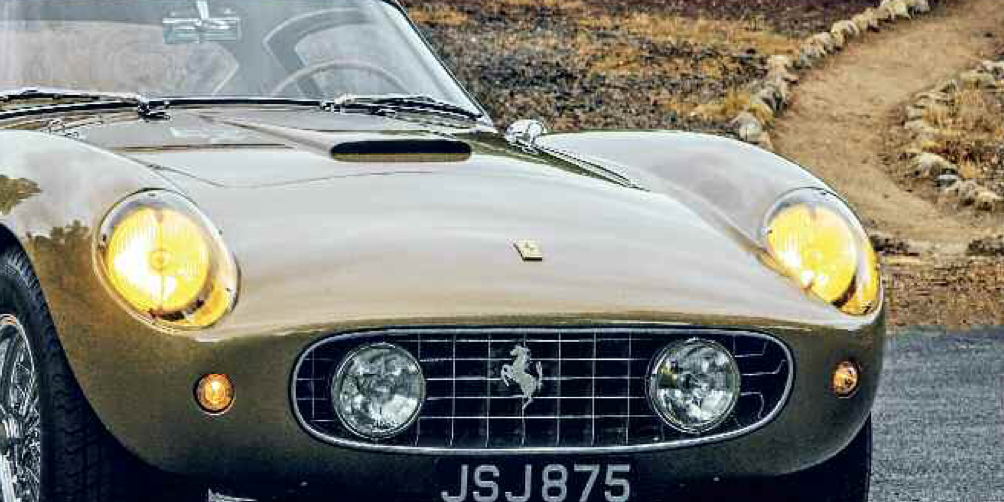 IT WAS BARELY DAYLIGHT the first time I saw it, yellow Marchal headlights piercing the morning Malibu mist. The distinct revving of a 3-liter Columbo V12 engine made the hair on the back of my neck stand up as the sleek, smooth Scaglietti bodywork slid into focus.
The 250 GT Long Wheelbase Berlinetta (s/n 0933GT) slunk into the parking lot of a monthly Cars & Coffee event, its bright red brake lights illuminating the very tips of its pinched, hand-rolled aluminum rear fenders, heading for a spot in the front row. Its soft-spoken owner soon emerged with a warm half-smile; Ray Scherr, a wonderful custodian to many classic cars, was out exercising one of his favorite Prancing Horses.

Ferrari and Gran Turismo race cars go hand in hand, and none more so than the 250 GT series. Built from the mid 1950s through the early ’60s, these 3-liter machines
have long been the most sought-after Prancing Horses. The 1956-’59 250 GT LWB (coincidentally, one of the most stylish Ferraris ever produced) started the line, and
was focused on racing from the beginning.

In September 1956, Alfonso de Portago and Edmund Nelson famously drove an LWB to victory in the week-long, 3,345-mile, six-circuit-races-plus-twohillclimbs Tour de France. That win, plus three additional consecutive victories in the event, earned the model its unofficial designation of Tour de France, which has stuck to this day. (Among numerous other wins, the TdF also won the 1957 Mille Miglia with Olivier Gendebien and Lucian Bianchi, further enhancing the model’s lore in the racing world.)

Our featured 1958 example is the 14th of 36 “singlelouver” Tour de Frances constructed. A total of 73 TdFs were built, the others split between earlier 14- and 3-
louver examples bodied by Scaglietti and a handful of cars clothed by Zagato. All were built on a 2,600mm wheelbase chassis of twin oval tubes, with coil-over front suspension and a live rear axle. Only this one was originally painted Oro Chiaro, however.

The heart and soul of the TdF lives under the hood. Ferrari wanted a much more aggressive version of its roadgoing coupe for privateer motorsports competition, so
needed a big leap in engine performance. As a result of the engineer’s machinations, the SOHC, dual-distributor, drysump, triple-carburetor (Weber 36DCZ3s) V12 produced 260 horsepower at 7,000 rpm. And, of course, a soundtrack that remains music to the ears.

On June 17, 1958, s/n 0933 was delivered new to its first owner, Casimiro “Miro” Toelli [VLADIMIRO TOSELLI?] of Torino, Italy. Toelli was a wellknown, and spirited, racing driver in Europe, and in September ’58 he piloted s/n 0933 to a fifth-place finish at the Molina-Rocco Cocconato hillclimb in Italy. He DNF’d at his next event, October’s Trieste-Opicimina hillclimb, but then won the GT class and scored the fastest time at the Aosta-Pila hillclimb later that month. The final race under Toelli’s ownership saw a fourthplace finish at the Grand Prix of Venezuela that November; soon after, he sold the car to Lino Fayen of Paris, France.

Fayen only had the Ferrari for a short period of time. He raced it once, in the Gran Premio [della?] Lotteria at Monza,then sold it to Maurizo Marcotilli of Caracas,
Venezuela. In 1960, Marcotilli had the engine upgraded with a larger-capacity magnesium Testa Rossa oil tank, higher compression pistons, and lightweight connecting rods (432 grams, according to the car’s records), all of which remain in the Ferrari today. Marcotilli soon moved s/n 0933 back to France [CONFIRM], where its stay turned out to be far longer than anticipated. In 1961, feeling the heat from the French government over heavy taxes he had accrued, Marcotilli fled the country—leaving the Ferrari at the airport in Paris. The authorities quickly confiscated the car, and ending up holding it for nearly seven years. A public customs auction in 1967
allowed the TdF to change hands once again, to one Mr. d’Epenoux of France.

The Mas du Clos collection of Pierre Bardinon next acquired the car and painted it red. In 1975, s/n 0933 was sold to Count Frederic Chandon of the Moet et Chandon family, but soon headed back to Bardinon for five more years. Six other French owners enjoyed the car over the next 12 years, after which s/n 0933 moved through a string of European car dealers.

In 1997, the Ferrari was carefully repainted in its original Oro Chiaro hue. Thus freshened, it went on the show OPPOSITE TOP Topped with three Weber carburetors, Tour de France’s 3-liter V12 produced 260 hp at 7,000 rpm. BELOW Recently uncovered photos show s/n 0933 racing in South America, though few details are known. BOTTOM
Single louver on sail panel identifies s/n 0933 as a 1958- or-later TdF. circuit, winning the “Sheer Elegance” award at the Louis Vuitton Concours d’Elegance
[WHEN?]
The modern-day attention given to this somewhat forgotten Ferrari race car revealed an interesting anomaly. When the engine was overhauled by Terry Hoyle Engineering in England, it was discovered s/n 0933 does not have a number stamped on its engine block, nor does it have a numero interno stamped on the cast surface below the
engine number.

How could this be? Did the car ever have an engine number stamped at the factory? Were the numbers milled off at some point, evidence of fraud or severe tampering? The
most likely explanation lies with such cars’ racing history.
During this period, Ferrari commonly changed out engines and gearboxes in order to get its cars back on track quickly, and often cut corners when it came to the paperwork required to move cars from country to country in order to keep everything moving along smoothly.
There’s another possibility; remember second-owner Fayen? His father was a leading Ferrari concessionaire for central and northern South America in the 1960s. If there
was an engine issue during Fayen’s ownership, for example,it’s quite possible his father would have ordered an unstamped replacement engine block from the factory (it was up to the concessionaires to perform stampings) and quickly installed it before the car was sold. Furthermore, the timing-chain casting does reflect the correct type-face, which furthers the point of originality. [EXPLAIN]

In 2006, s/n 0933 was offered by Gooding & Company at its Pebble Beach auction. There, displayed with its original books, tools, original Italian registration, and
period pictures, it caught the eye of current-owner Scherr.

“I had my eye on a few different Ferraris at the time, but this one was available and right in front of me,” Scherr tells me during an interview inside his 20,000-square-foot storage facility and office space, which houses over 50 cars of various makes and models. “This one came up in Monterey and I felt like it belonged to me. It’s a special car and I treat it as such.

“Soon after I purchased the car, I sent it to Wayne Obry at Motion Products and did a full restoration,” he continues.

“There’s nothing major to report about the process, it was all about preserving the car and honoring its history. I did replace the original bordeaux interior with the saddle-colored one you see today—I just thought it looked better—but I still have the original seats here and walk by them every day.”

Since its restoration, the Tour de France has seen regular use. “It’s accompanied me on long drives such as the California Mille and Colorado Grand,” says Scherr, “and also goes to [local events like] Cars & Coffee and Piazza GranTurismo. I very much enjoy the sound of the engine, and the push start of the early 250s; it really rings it to life.

My favorite thing to do is take a spirited drive through the canyons, which are fantastic in Malibu. The car is very fast and has been pleasantly reliable.” As Scherr shows me around his garage, it’s clear he gives s/n 0933 special reverence among all of the other beautiful Ferraris surrounding it, including an SWB Cal Spyder, a 599
GTO, and a pair of F355s. “This model just has some really swoopy lines to it that I like,” he concludes. “In my opinion, it’s so much better than the 250 GT SWB. I prefer not to have this car in red, and I’m glad it’s back in its original color.”