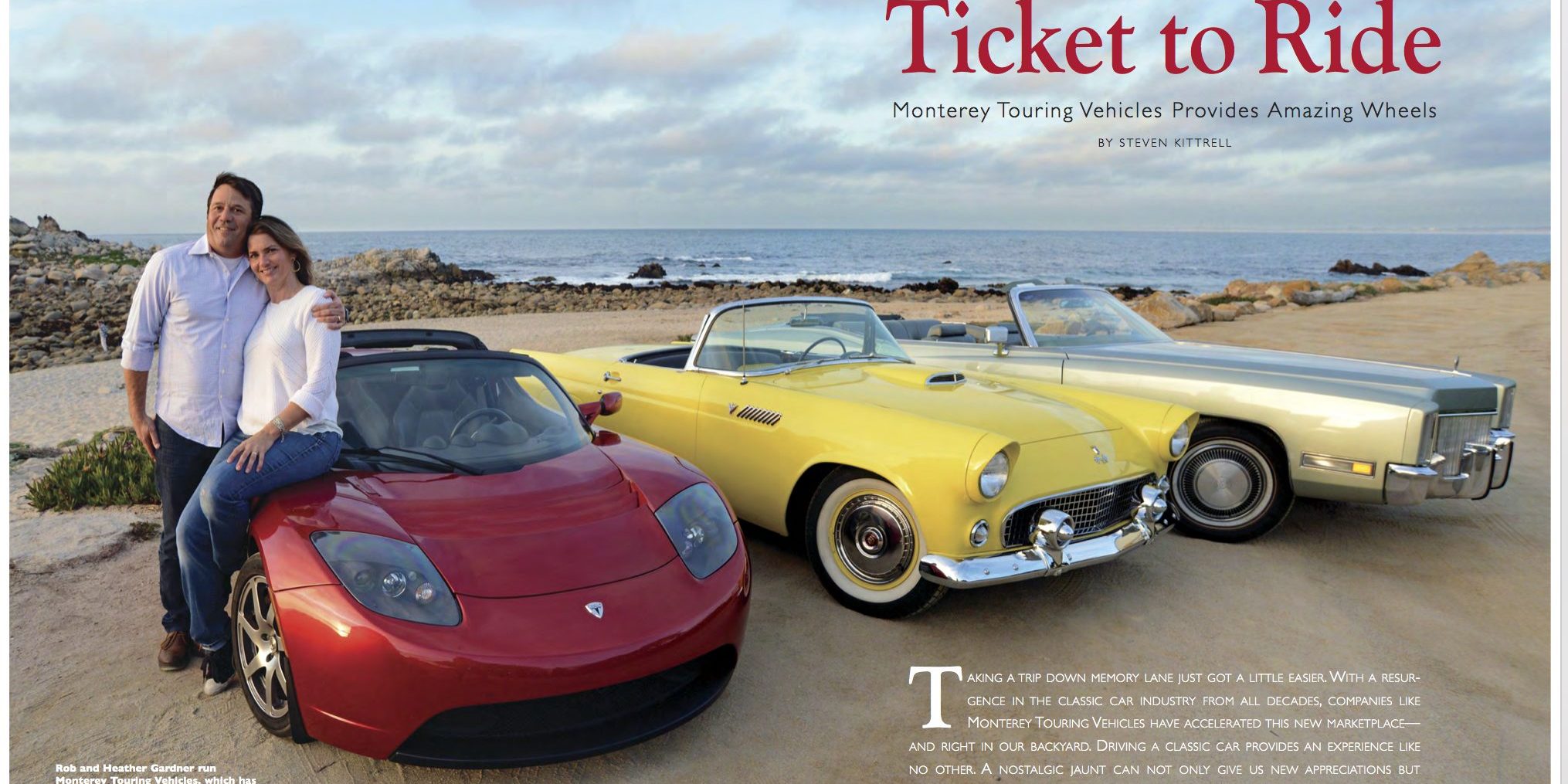 Sporting a paltry 18 horsepower, a roll back convertible top and plenty of smiles per miles, his was the perfect car to take down to Carmel-by-the-Sea for brunch.

This 1978 Citroen 2CV convertible from Monterey Touring Vehicles rents for $200/half day to $400/full day (current prices.)
The French automobile with a roll back top only has 18 horsepower but is charming and unique.
As an automotive enthusiast who has driven many makes and models from nearly every decade and region, I had to see what the buzz was all about. Co-owner Heather Gardner was gracious enough to meet with me at their new location at 2228 Del Monte Avenue in Monterey and give me the full rental low-down. Pulling up to the 10,000-square-foot building, I saw several collector cars lining the parking lot, ready to be plucked for
an adventure.
Cars can be rented for a half or full day—which makes me think of possibilities for weddings, special events, photoshoots or just a drive down the coast. I decided I couldn’t possibly pick just one, so I planned four adventures in just as many cars. These were routes that anyone could do if they had some time to really tune out of the daily grind and turn back the hands of time.
French Toast
With the first car I took out, I had a taste for something foreign and an appetite as well. Tucked away amongst big American metal was the 1978 Citroen 2CV “deux chevaux,” a quirky French convertible. Sporting a paltry 18 horsepower, a roll back convertible top and plenty of smiles per miles, this was the perfect car to take down to Carmel-by-the-Sea for
brunch. From Del Monte Avenue, I made my way through the Lighthouse Avenue tunnel, down through Cannery Row and out to Lovers Point on my way to the historic 17-Mile Drive. I made a quick stop at the Lone Cypress before sneaking in the back

With its bright two-tone paint, flawless interior and all the Monterey Pop Festival nostalgia you could ask for, I was ready to buy the ticket and take the ride.

This 1961 VW Samba Microbus, like all vehicles in the fleet, can be picked up and dropped off within 10 miles of Monterey
for a $30 delivery fee each way. Other rental options include a 1938 Rolls-Royce Phantom III and a 1981 DeLorean.
way to town. The number of waves and thumbs up were incredible. I effortlessly pulled right in front of Etas-Unis French American Bistro for an authentic French experience. The restaurant proprietor was even a past Citroen owner. Fantastique!
Big Sur or Bust
Personally, I gravitated towards the 1961 23-window VW Samba Microbus the moment I laid eyes on it. With its bright two-tone paint, flawless interior and all the Monterey Pop Festival nostalgia you could ask for, I was ready to buy the ticket and take the ride. With its period looking radio, with modern iPhone plug-in set up, I had Hendrix blasting all the way down Highway 1 towards Big Sur. Can you really blame me? When you’re going
nowhere fast with a crew size up to seven, this is the only way to travel. The manual gearbox takes some talent, but once you get in the groove and get off the grid, you’ll feel right at home. My lunch spot was the iconic Nepenthe eatery, perched 800 feet up the cliffside with incredible views and classic California fare. Don’t forget to lose track of time while you’re at it.
California Dreamin’
Being a little cliché never hurt anyone, so what’s wrong with a cruising convertible Mustang with three of your best friends? Nothing at all, in my opinion. MTV offers this 1965 Ford Mustang GT, which for the era, is both fast and comfortable. There was a reason they were celebrity owned and had pop songs written about them. With a carefree automatic transmis- 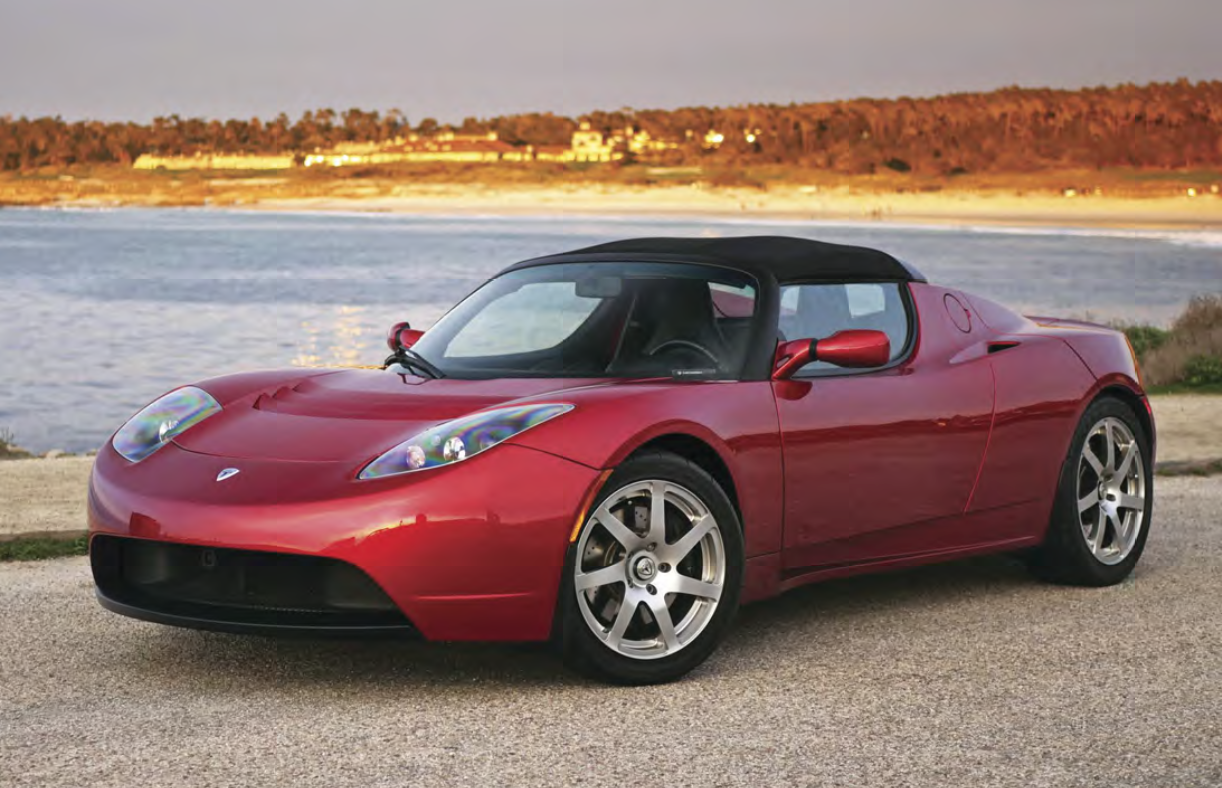 With a carefree automatic transmission paired with the classic 289 V8 and around 225 horsepower, you really hit the sweet spot for ’60s Americana.

This 1965 Ford Mustang GT Convertible is a real head turner and is perfect for special events, weddings, cruising Carmel and for leisurely drives up and down the coast.
sion paired with the classic 289 V8 and around 225 horsepower, you really
hit the sweet spot for ’60s Americana. I practice what I preach and picked
up a few friends to come along for the ride.
The North was calling my name for this all-day rental. WeatherTech Raceway Laguna Seca was having a track day, so we all swung through there on our way up to Santa Cruz. A little shopping on Pacific Street, followed by a late lunch in Half Moon Bay made it the perfect afternoon. Make sure to stop in Moss Landing for fresh produce on your way back to reality.
Modern Luxury Meets Rare Performance
Finally, it was time for a couple of days of staycation with a date. In order
to please all parties involved, I decided to go with some modern creature
comforts—the 2008 Tesla Roadster. Let me explain. This is the first-generation Tesla (only 1 of 500 made) and has a 0-60 time of 3.8 seconds. She was happy it was safe, luxurious and electric, and I loved the massive torque and quiet acceleration. It’s a win-win, while also being a rare automobile for modern times.
We decided to stay a couple of nights at the Santa Lucia Preserve Hacienda, which was close enough to town for evening dinners with perfect roads for me to really enjoy this car. Out past The Quail Golf Course is the private entrance to The Preserve, where the roads are made for this car and the views are breathtaking. With lasting battery packs built in, the car was ready to roll when we were, shooting back into the Valley for 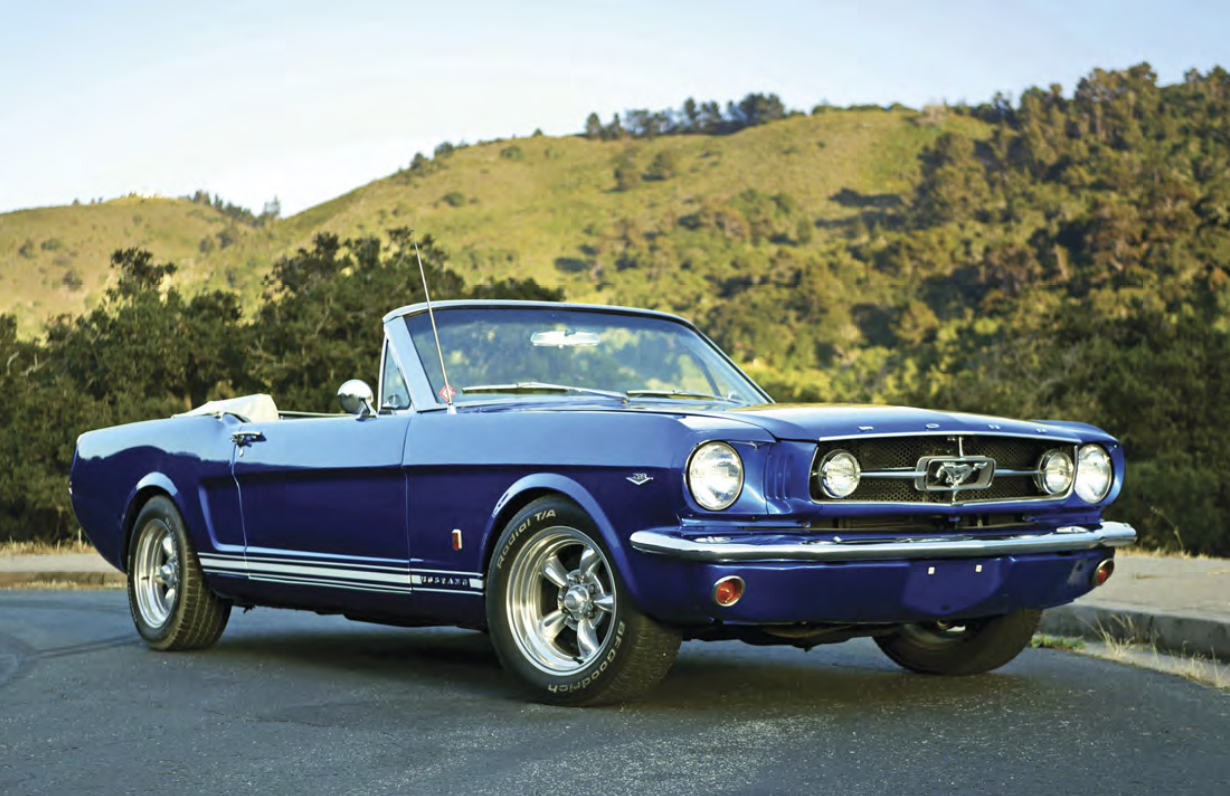 With lasting battery packs built in, the car was ready to roll when we were, shooting back into the Valley for casual but meaningful eats with a warm Country-Western and outdoor feel.

Drivers with a U.S. license must be 25 years or more to rent cars like this 2008 Tesla Roadster. With stunning scenery,the Monterey area is the perfect place to go for a special drive.
casual but meaningful eats with a warm Country-Western and outdoor feel. Even though Elon Musk sent this car to space last year, we preferred it right here in our backyard.
When’s the last time you had a proper staycation? A road trip gives you the freedom to pack up the car, be on your own schedule and spontaneously navigate your way through a new adventure, all while staying safe and exhilarated. Monterey Touring Vehicles reliably provides a fun, nostalgic and eclectic experience, even for us locals. You might stumble upon a beautiful pebbled beach, local event, or cute café you never knew you
needed in your life.
The fleet of vintage cars spans seven decades and there is a style for any number of miles you choose to travel. Whatever vehicle you are behind the wheel of, the homegrown and privately owned collection will quickly put a smile on your face and turn heads. Trust me, I had to leave many people to the curb with their cell phones out. My motto is this: life is too short to drive boring cars. Heather Gardner and staff understand this far too well
and have turned their passion and hobby into an opportunity for all of us to navigate through our comfort zones. Tell a neighbor, relative or friend who is coming in from out of town that this is the only way to travel the Peninsula—just make sure there is a car left for me to drive.
For more rental information on Monterey Touring Vehicles, please visit
www.montereytouringvehicles.com or call 831/471-5515.